Justice for Victims of Sexual Violence in Conflict: Is It Possible? 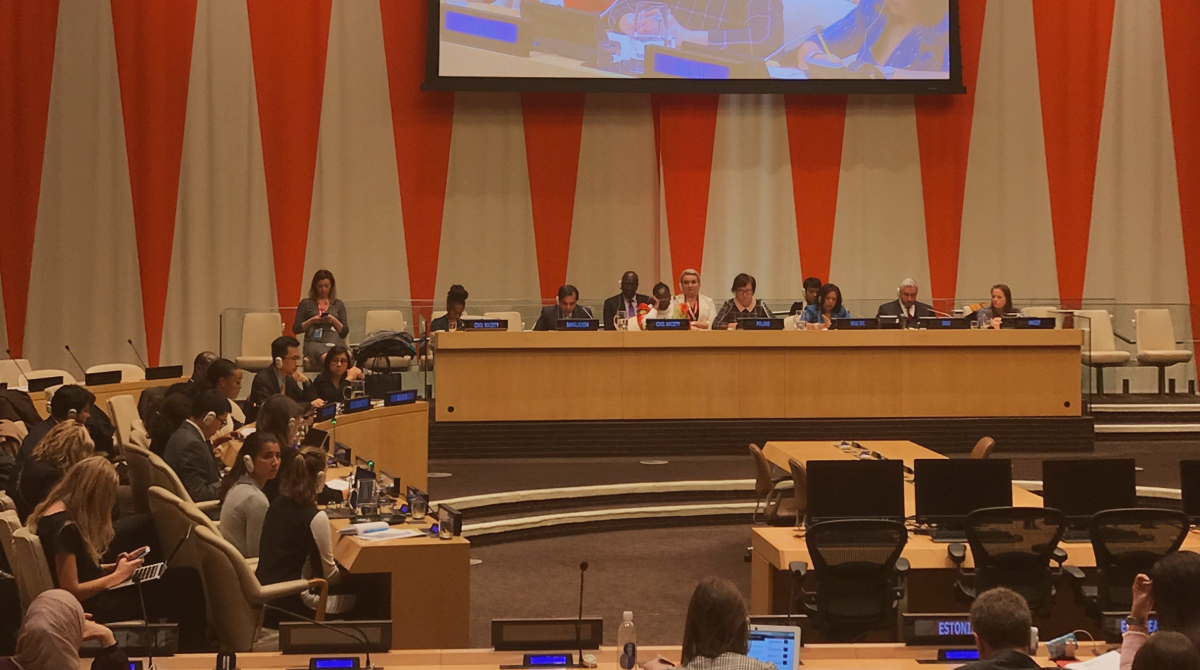 Just last week, the United Nations Security Council held two Arria-formula meetings open to UN member states, observers, NGOs, and the press. On both occasions, the room felt heavy; men tiptoed around their words and women sat upright, listening intently, almost in indignation. The meetings were titled “Moving from a Culture of Impunity to a Culture of Deterrence: The Use of Sanctions in Addressing Sexual Violence in Conflict” and “On Children Born of Sexual Violence in Conflict Zones”. For both of these meetings, I was in attendance to represent the Global Justice Center and listen to advocates present firsthand accounts of why these issues must be addressed by the international community. These topics have been gaining attention in the media and the international community after the Nobel Committee’s decision to jointly award Yazidi activist Nadia Murad and Congolese doctor Denis Mukwege with a Nobel Peace Prize, honoring their work to end sexual violence and rape as a weapon of war.

Over the past year, the world has borne witness to the Rohingya genocide in Burma. This sparked a conversation among activists and leaders about how the crimes perpetrated against Rohingya women, including torture, rape, and sexual abuse, are inherently gendered (read GJC’s legal brief in which we discuss why a gendered analysis of the Rohingya genocide is paramount, particularly when talking about impunity for sexual and gender-based crimes). However, only after sitting in a room with civil society speakers who presented their lived experiences was I able to understand the severity and urgency of the matter.

Powerful women like Rita Lopidia, Executive Director of EVE Organization for Women Development in South Sudan, Pramila Patten, United Nations Special Representative on Sexual Violence in Conflict, and Dr. Rebecca Brubaker, Senior Policy Adviser at the Center for Policy Research at United Nations University, were in charge of briefing the Council during the first meeting. Ms. Lopidia highlighted that sexual violence continues to be employed as a weapon of genocide, torture, and terrorism, and thus it must be addressed as a weapon of war by utilizing sanctions and holding the perpetrators accountable. Sanctions, Ms. Lopidia noted, can only be effective if they are enforced. Otherwise, the perpetrators of sexual violence will be shielded from justice. Ms. Patten initiated a discussion and evaluation of the current state of existing sanctions architecture, criticizing the fact that stigmatization is the only sanction being utilized as a response to sexual violence in conflict. Speakers underscored the need for sanctions to be enforceable, credible, clear, and timely. Without this framework, perpetrators of sexual and gender based violence will continue to be emboldened and threaten the life and security of women in conflict areas. When women like Ms. Lopidia, H. E. Ms. Patten, and Dr. Brubaker present their experiences and have a say in policy making and contribute to the international community’s endeavor to end sexual and gender-based violence, we make active strides towards gender equality and justice for victims.

The second meeting on Friday, October 26th, addressed the need for justice for all of the victims of sexual violence in conflict zones, specifically children born of sexual abuse and rape. Pramila Patten calls these children the “voiceless category of victims” of war. Children born out of rape in conflict situations are often denied citizenship and, in some circumstances, even left stateless. In Burma, both survivors of sexual violence and their children are stigmatized and relegated to the margins of society.  Civil society briefers Charo Mina-Rojas from Colombia and Evelyn Amony from Uganda spoke on their experiences with children born of sexual violence in conflict that occurred in their countries. Today, Colombia is an example of a country that recognizes these children as victims with a right to justice, reparation and redress. However, currently, there are no frameworks within the international system to properly address war-time rape or how to reintegrate children born of it. Without the proper mechanisms to ensure that these children and their mothers have access to mental and physical healthcare, these victims will not see justice. These civil society speakers have advocated for the most vulnerable populations in their communities, thus serving as a call to action on behalf of the international community. The voices of these speakers are particularly important to remind all of us that sexual violence in conflict and rape as a weapon of war have real victims and result in real trauma. If the international community excludes the narratives of civil society members, particularly of women with firsthand accounts of sexual violence and rape, it creates a gap between perceived urgency and action.

Together, both Arria-formula meetings reinforced the need for an objective framework in which perpetrators of sexual and gender based violence can be prosecuted and held accountable for their crimes. Further, the economic, social, and political empowerment of women is an initial step in order to amplify the voices of all women—survivors and advocates alike. Sexual violence perpetrated against the most vulnerable communities during war time is a threat to peace and security. States and multilateral institutions must work together to ensure that all states are able to end the cycle of sexual and gender based violence and impunity of those who perpetrate these crimes. Additionally, women who experience these crimes firsthand (whether as activists or as victims) must be given a platform in order to properly put together a narrative that accurately tells their story. When survivors and activists become participants in policymaking and advocacy, victims move one step closer to justice.

Photo by Sofia Garcia on Oct. 26th at the ECOSOC Chamber