A Call For All Member States of the Human Rights Council: End the Gross Violations of the Rights of Girls and Women Raped and Impregnated in Armed Conflict, to Non-Discriminatory Medical Care, Including Abortions, Under the Geneva Convention

[NEW YORK, NY] - Thousands of girls and women, impregnated by rape in armed conflict are routinely and illegally denied lifesaving abortions in places like the Democratic Republic of Congo (DRC), Burma and Sudan. The right to non-discriminatory medical care for these victims, which includes the option of abortion, is enshrined in common Article 3 of the Geneva Conventions.

On October 27, GJC President Janet Benshoof appeared at a Parliamentary event hosted by the Conservative Women’s Organization where she discussed how states have an obligation to ensure that women and girls raped and impregnated in conflict have access to an abortion. Click here to read CWO’s piece below.

Agents for Change - The Women of Burma, Film Screening & Discussion 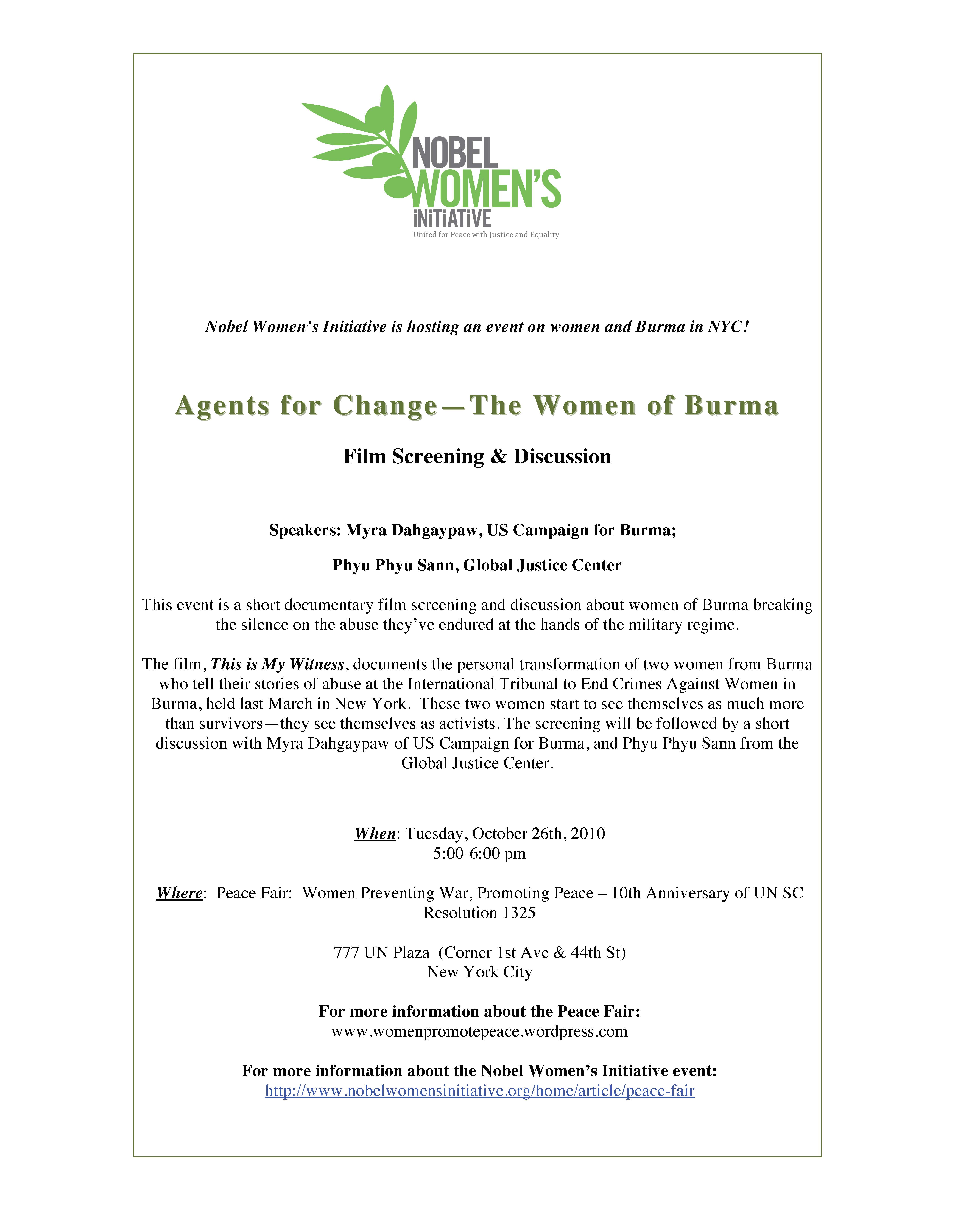 This event is a short documentary film screening and discussion about women of Burma breaking the silence on the abuse they’ve endured at the hands of the military regime.

Making Justice for Burma a Reality

I am part of a generation of people from Burma who grew up dreaming of and longing for justice. A generation that continues to be victimized by terrible acts of mass atrocities carried out by our own ruling regime. Extrajudicial killings, torture, and forced labor are prevalent; rape and sexual abuse by the military are rampant; and more than 200,000 civilians were forcibly displaced in the east. In regions where armed conflict is ongoing, villagers have been used as human minesweepers and the forcible conscription of child soldiers is widespread.

More that 2,100 of my fellow country women and men who dedicated their lives to the ideals of justice and democracy are now languishing in remote prison labor camps far from their homes, in atrocious conditions, enduring mental and physical torture and summary executions at the hands of the military.

When I was inside Burma, the widespread repression and atrocities made me feel desperate and hopeless – that we were on our own and no one could help us to end this circle of impunity. As part of the Global Justice Center team working to uphold international commitments to the rule of law and enforce the people of Burma’s rights to criminal accountability, my sense of desperation has changed to one of hope. The international legal tools exist to give the people of Burma justice, and the GJC is working tirelessly to see that this happens.

This fall, the military regime will entrench its power permanently through elections that will trigger the full implementation of a criminal Constitution that codifies the military control over the government. What’s more, this Constitution gives the military amnesty for the crimes it is committing against its people and ensures that no civilian judge can ever hold a member of the military accountable.

This aggressive and deliberate act by the military to enshrine impunity as a “right” is a serious breach of peremptory norms striking at the heart of Burma’s obligations under the Genocide and Geneva Conventions, customary international law, and UN resolutions on women, peace and security and the use of sexual violence in conflict.

We are preparing a draft Security Council Resolution declaring the Burma 2008 Constitution and any elections arising therefrom null and void, as it did with the South African apartheid Constitution in 1984. The pivotal precedent set by UN Security Council Resolution 554 on South Africa provides a framework for addressing analogous constitutions and election processes that entrench repressive regimes. In the upcoming months we are seeking avenues to bring this resolution before the Security Council and asking the global community to respect its commitment to international justice by joining us in calling for a referral of the situation in Burma to the International Criminal Court.

If the elections in Burma take place this fall, the threat that Burma poses to global peace and security will continue to escalate. This is our opportunity to show the world’s dictators that global rule of law will not be flouted.

The dream of justice for the people of Burma – one that I held onto my entire life – must become a reality.

Read a speech by GJC President Janet Benshoof on advances in international law to end impunity in Burma here.

In her statement last Thursday, UK Baroness Uddin used a new legal argument from the Global Justice Center to call for the end to the routine denial of access to abortions for women who are raped and impregnated in conflict. Baroness Uddin identified the United States policy of censoring humanitarian aid recipients from speaking about or providing access to abortions as playing a major role in the continuing violation of the rights of these victims and called on the UK to ask questions of the United States about this policy when it is reviewed by the UN Human Rights Council.

Baroness Uddin: My Lords, I, too, thank the noble Lord, Lord Chidgey, for initiating this important discussion. In the UK we should be rightly proud of the British leadership in advancing the millennium development goals which represent a vision of a world transformed where equality and justice prevail.

However, while we are very pleased, one group of women remains outside the MDG effort. Until we address this failure, we cannot speak of real progress. Today I ask our Government to call explicitly for girls and women who are forcibly impregnated by the vicious use of rape in armed conflict to be included under MDG 5-reducing maternal mortality. “Rape as a weapon of war” is a phrase commonly used accurately to describe what is happening alongside today’s armed conflicts, but we rarely speak about the consequences of this weapon. Thousands of girls and women impregnated by rape used as a weapon of war are routinely denied access to abortions. Girls and women die from their attempts to self-abort and from suicide resulting from untold stigmatization leading to social marginalization.

We should do what no other country has done: to ensure that the humanitarian medical aid provided to girls and women in places such as Congo, Sudan and Burma-an endless list of countries-gives them choices and access to abortion when pregnancy is a direct result of rape as a weapon of war. This is a moral imperative and a legal obligation. The Geneva Convention requires that civilians and combatant victims receive non-discriminatory medical care, whether it is provided by the state in conflict or by others. Why, then, are pregnant rape victims given discriminatory medical care through the routine denial of access to abortion? The embedded inequality towards women in conflict settings has been recognised by the Security Council in such historic resolutions as 1325 and 1820. Equal justice for women is not limited to the courtroom, it must be extended to supporting those women who are victims of the inhuman practice of rape as a weapon of war.

I draw the attention of the House to the recent report of the Harvard Humanitarian Initiative and Oxfam, which details examples of the impact, stigma and suffering of raped children and women in Congo, Sudan and elsewhere, where no legal provision exists to support them. It also mentions that women should be given preventive care-that is, utilisation of contraception-as though women who are raped can be prepared for such horrors.

One of the solutions proposed by women’s organisations, including the international human rights organisation the Global Justice Center, is that access to abortion must be a critical part of the support available to women. The centre filed a shadow report with the Human Rights Council asking it to recommend that the US remove the prohibitions put on humanitarian aid to rape victims in conflict, as it violates the US obligation under the Geneva Convention. The UK can and must support this issue by asking questions of the US during the council’s review process due shortly.

I know that these are difficult matters for many individuals and countries to address, and international donor communities have thus far resisted pressurising countries to review their policies. Neither criminal abortion laws in the conflict state nor foreign aid contracts with the United States can serve as defence to a state provision of discriminatory medical care to all victims under international humanitarian law.

Time is short, and I should have liked to highlight many examples of countries such as Bangladesh where the suffering and humiliation of rape has left decades of suffering, ill health and stigma. The UK must take a lead to end that discrimination. This will mark real progress towards the millennium development goals and towards ensuring equal rights for women under international humanitarian law.