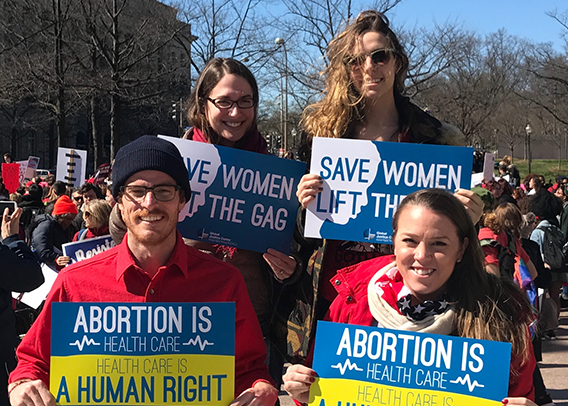 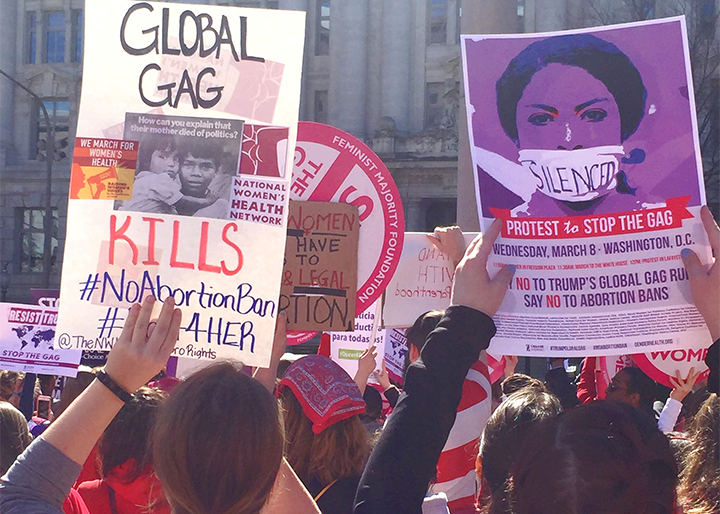 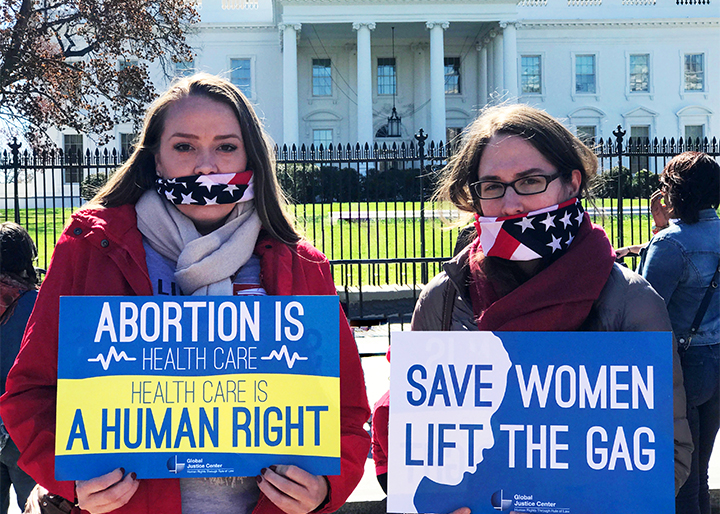 GJC at the White House 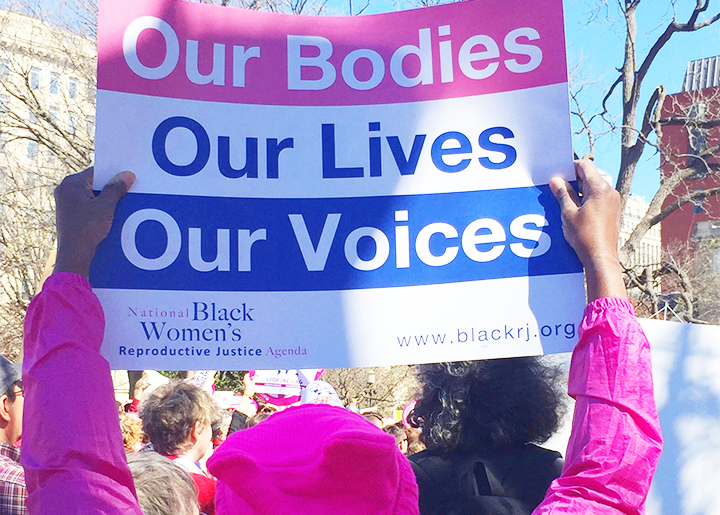 Our Bodies Our Lives Our Voices 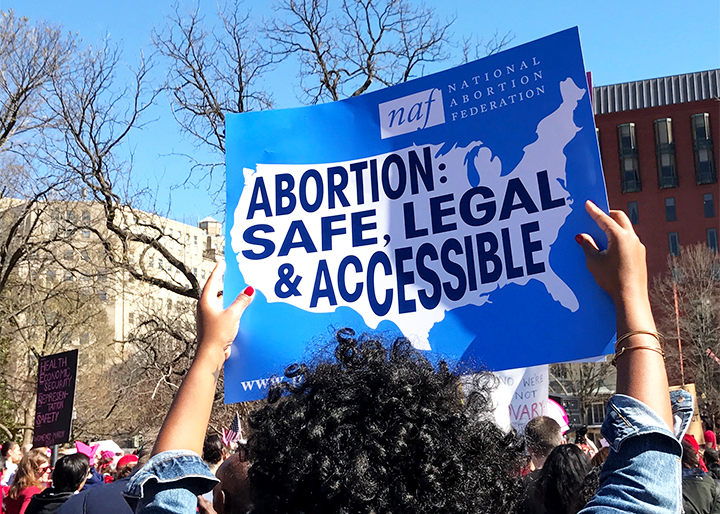 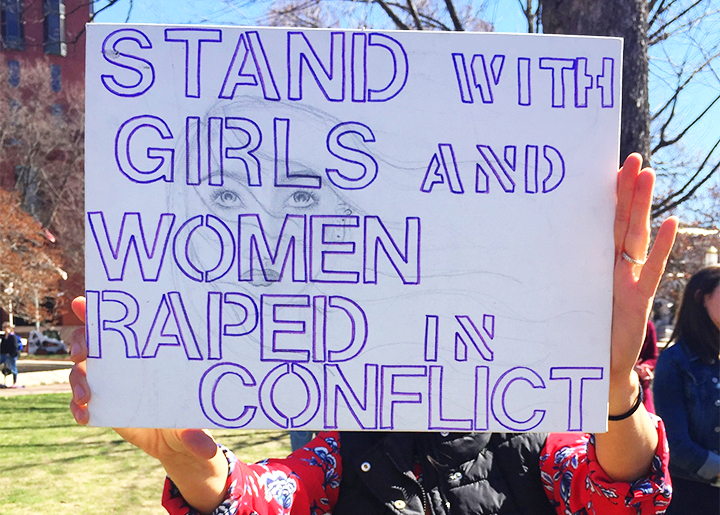 Stand With Girls and Women 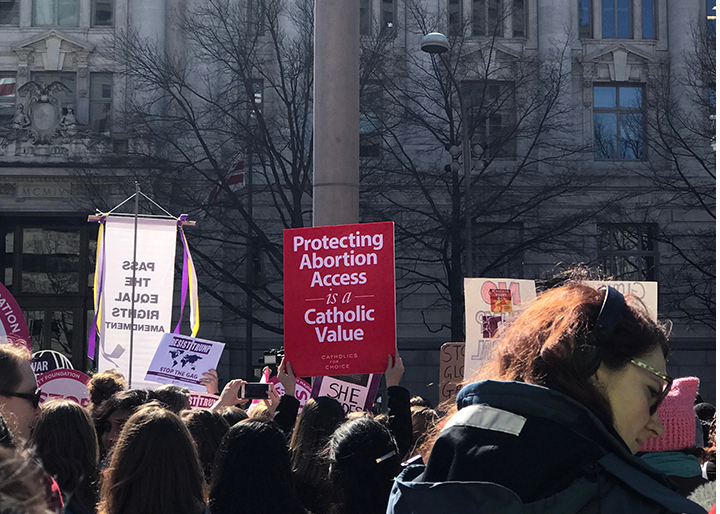 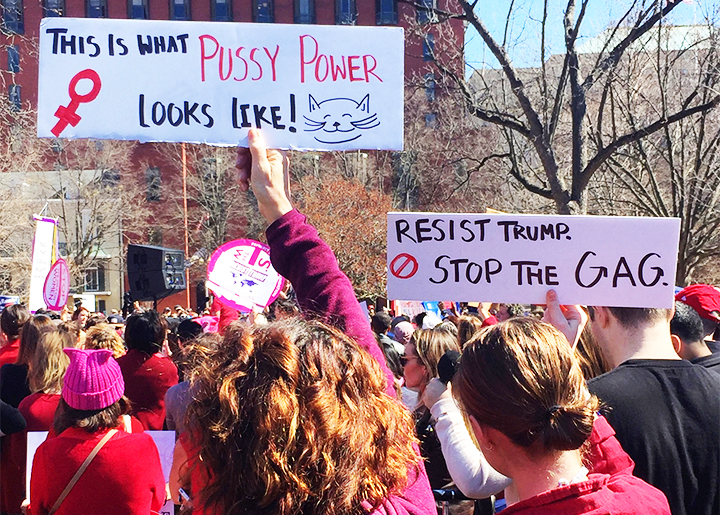 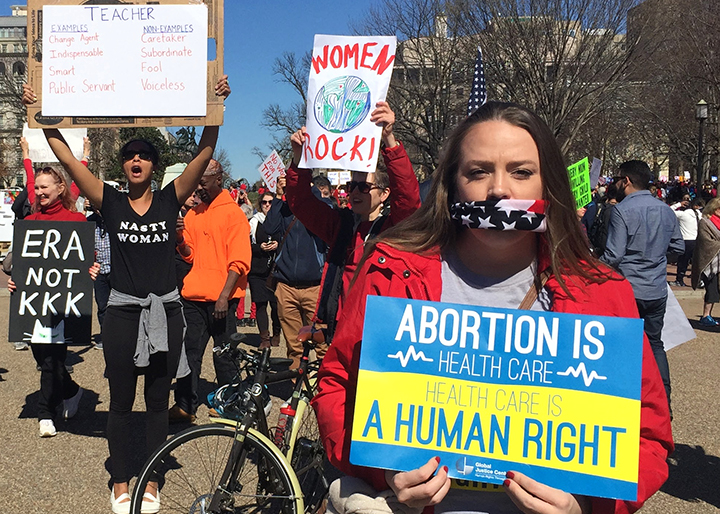 Abortion is Healthcare, Healthcare is a Human Right 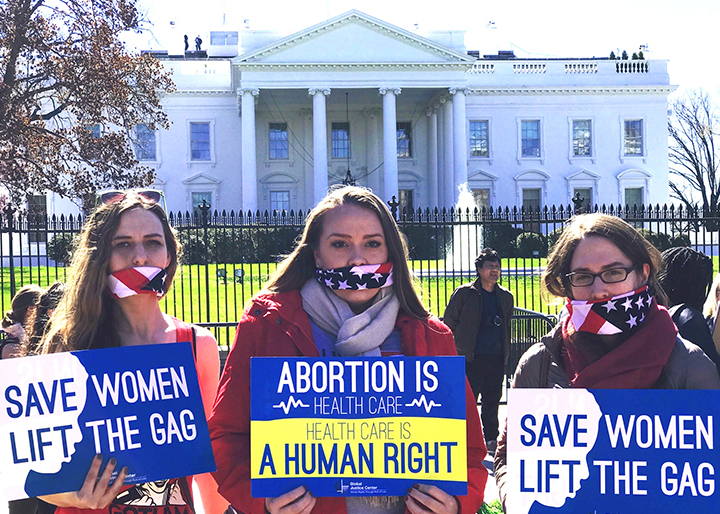 Save Women, Lift the Gag 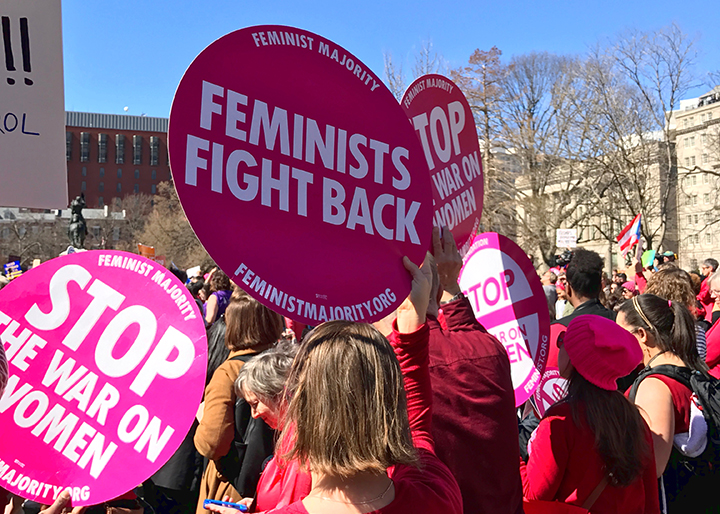 Movie Screening of Jackson: The Place With One Clinic 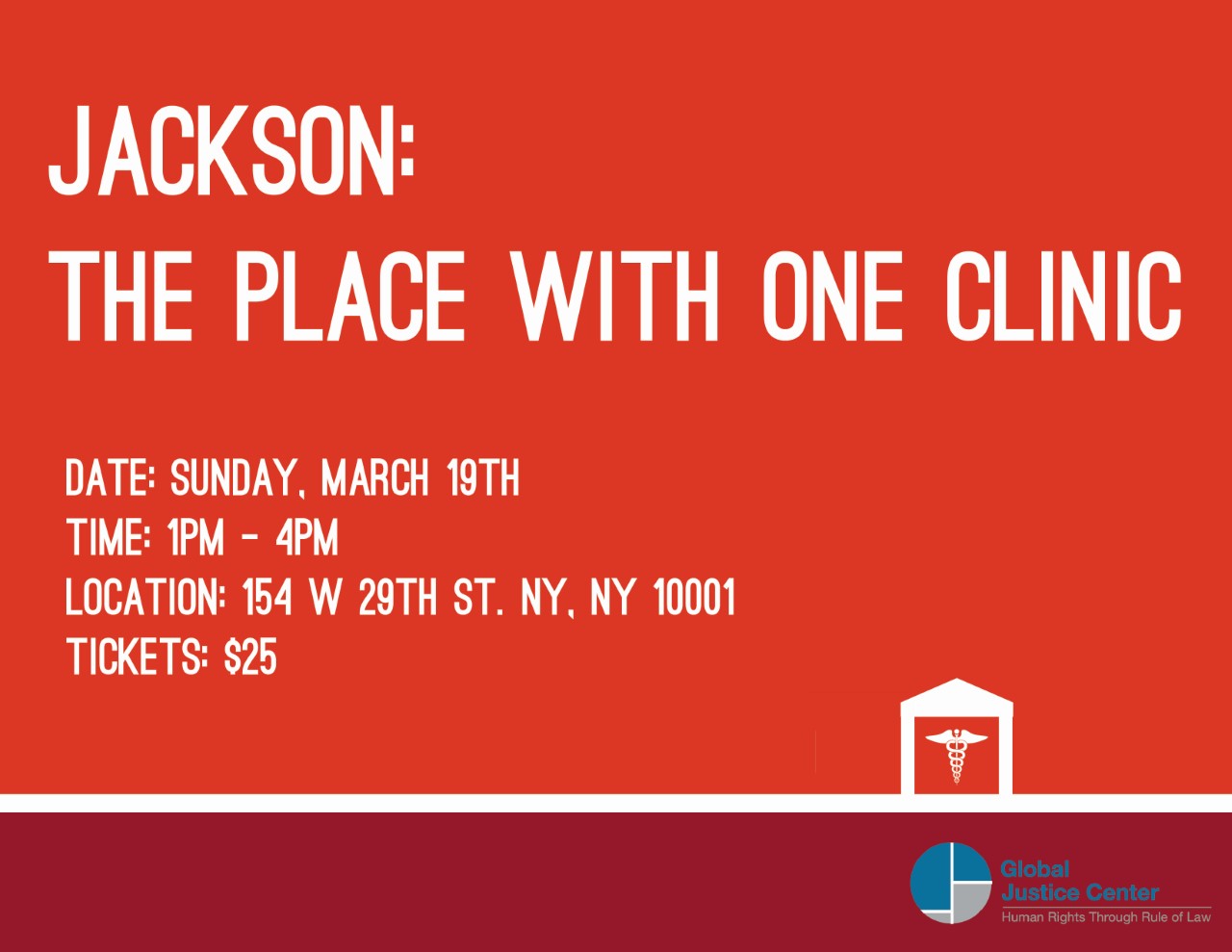 GJC is hosting a movie screening about the last abortion clinic in Mississipi.

Read about it here

Washington, DC – Today, on International Women’s Day and the day of the Women’s Strike, the Global Justice Center joins over 40 other partner organizations in protesting against Trump’s reinstated and expanded Global Gag Rule. 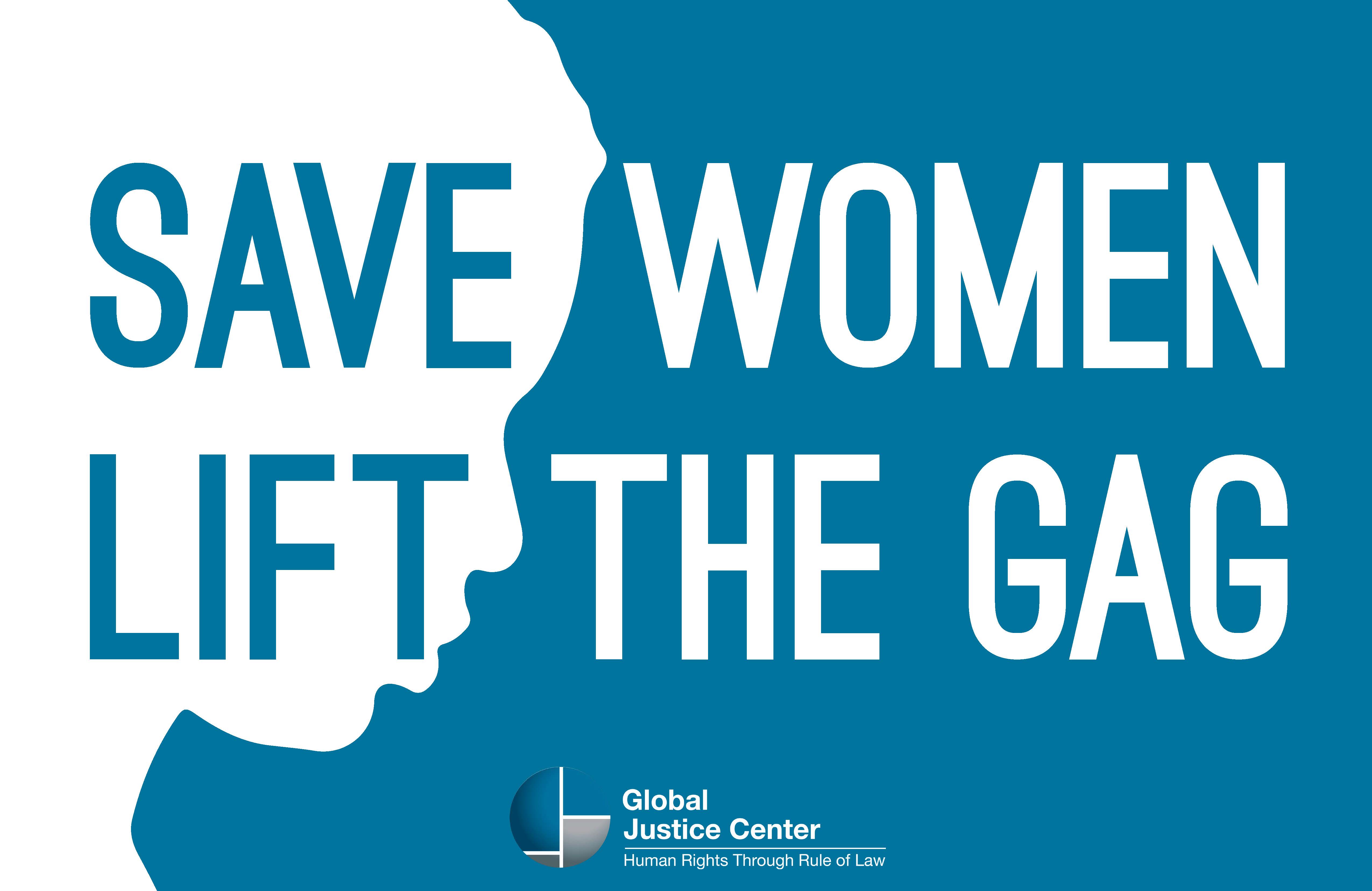 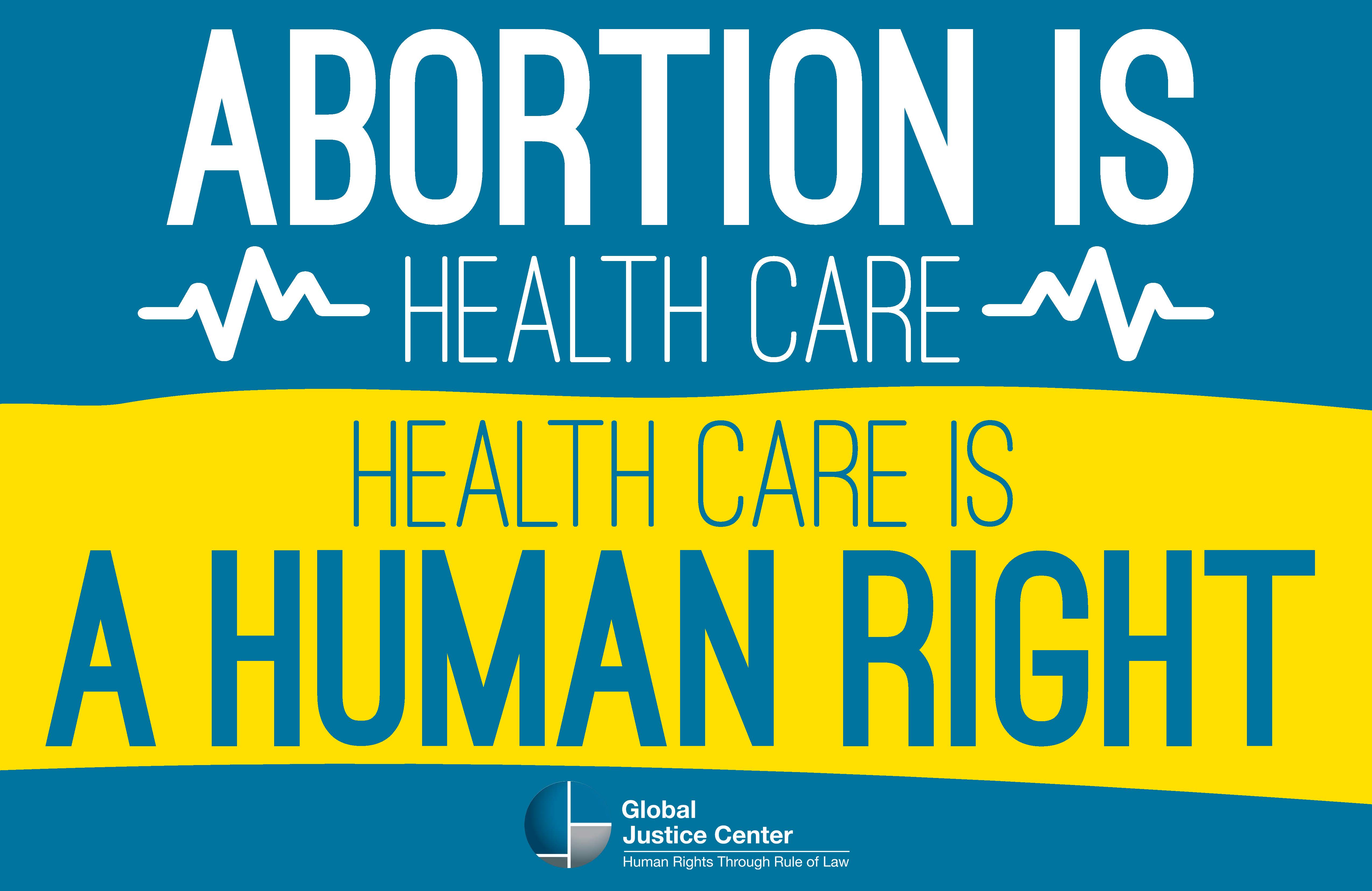 Download and print these signs to stand with the Global Justice Center and protest Trump's reinstatement and expansion of the Global Gag Rule. 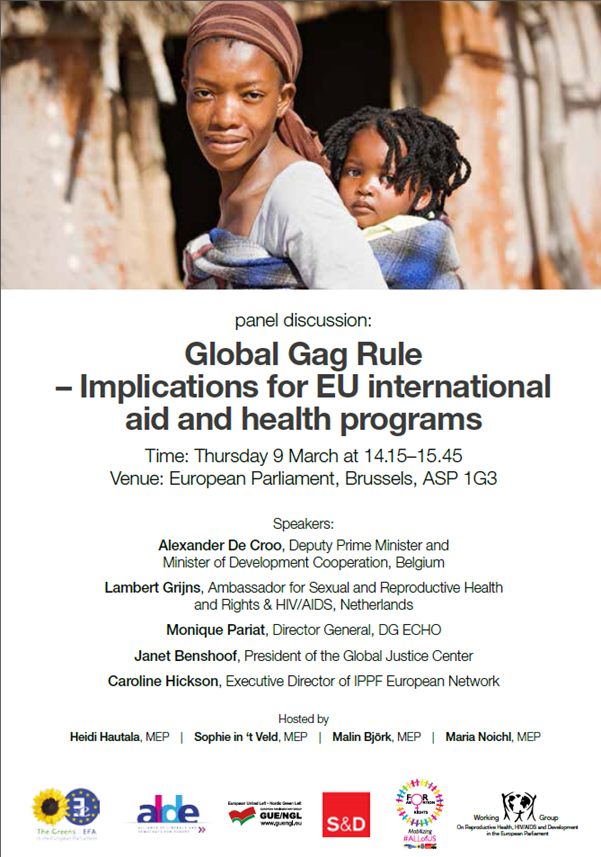 Protest to Stop the Gag 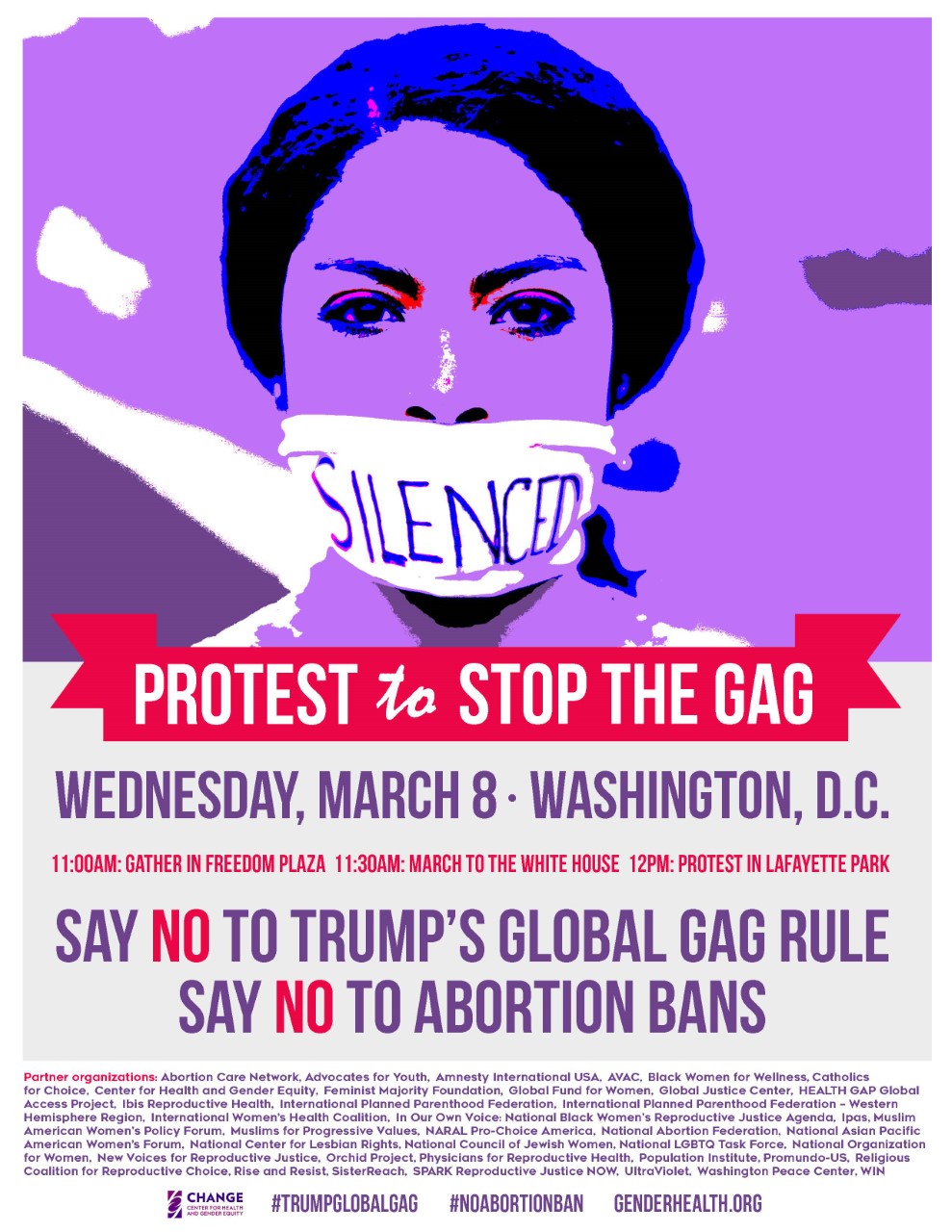 Read about it here

Brussels (BE)– Today, the Belgian, Dutch, Swedish and Danish Governments hosted a conference in support of the global fundraising initiative “She Decides.” The initiative was founded to combat the impact of the Global Gag Rule that Donald Trump signed on his second day in office.

Can Your Organization Speak About or Provide Abortion Services under the US Helms Amendment and Trump Global Gag Rule? 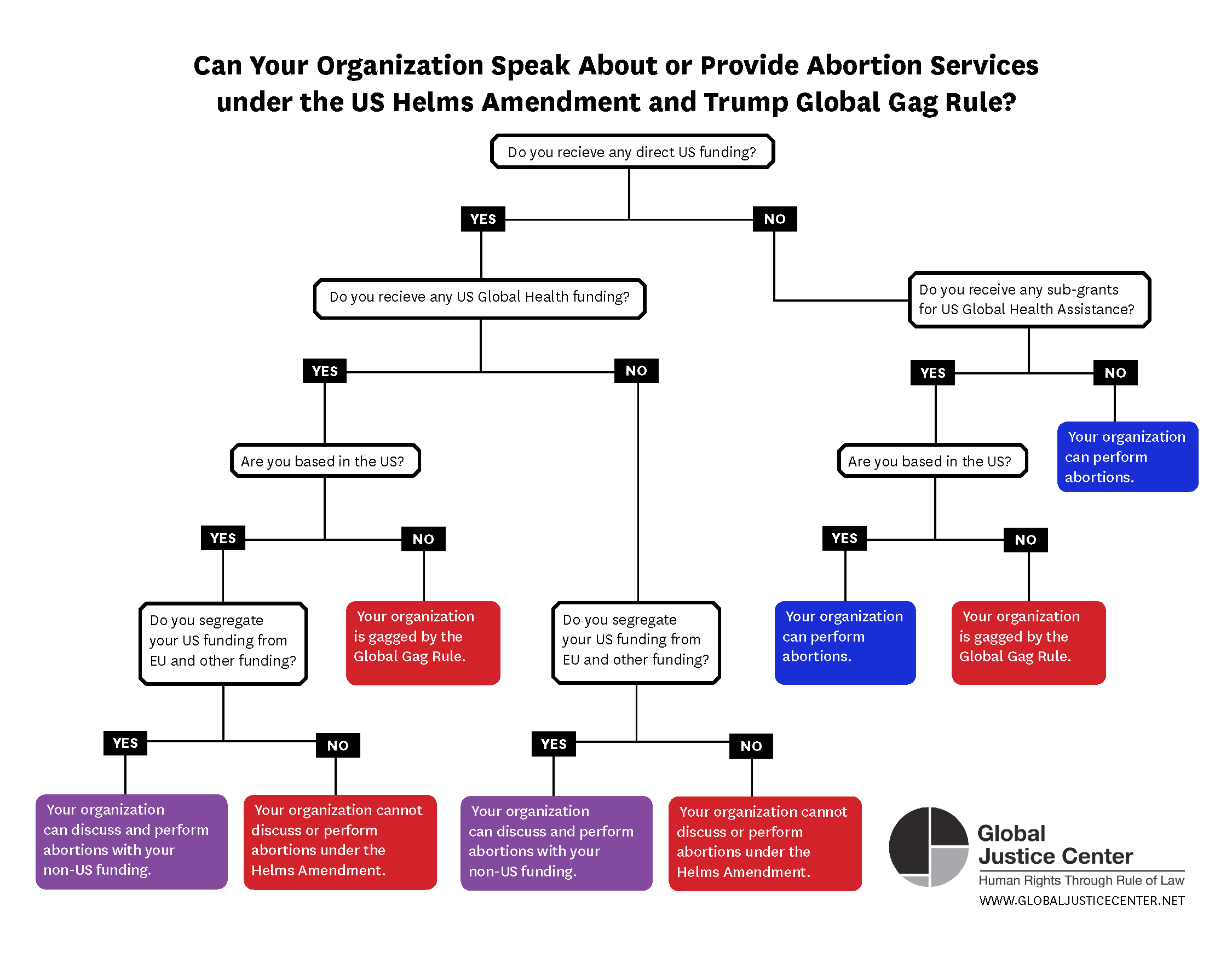 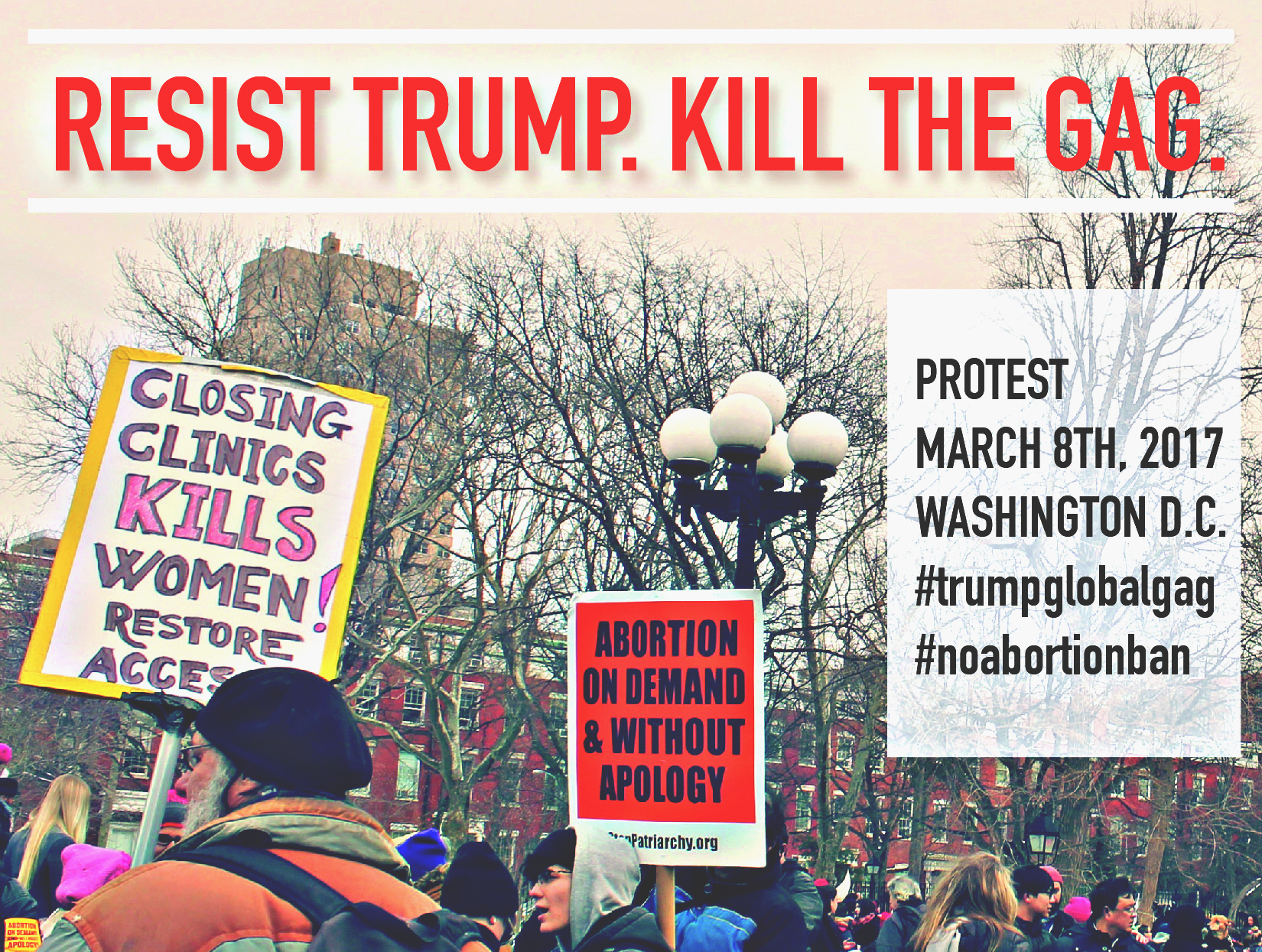 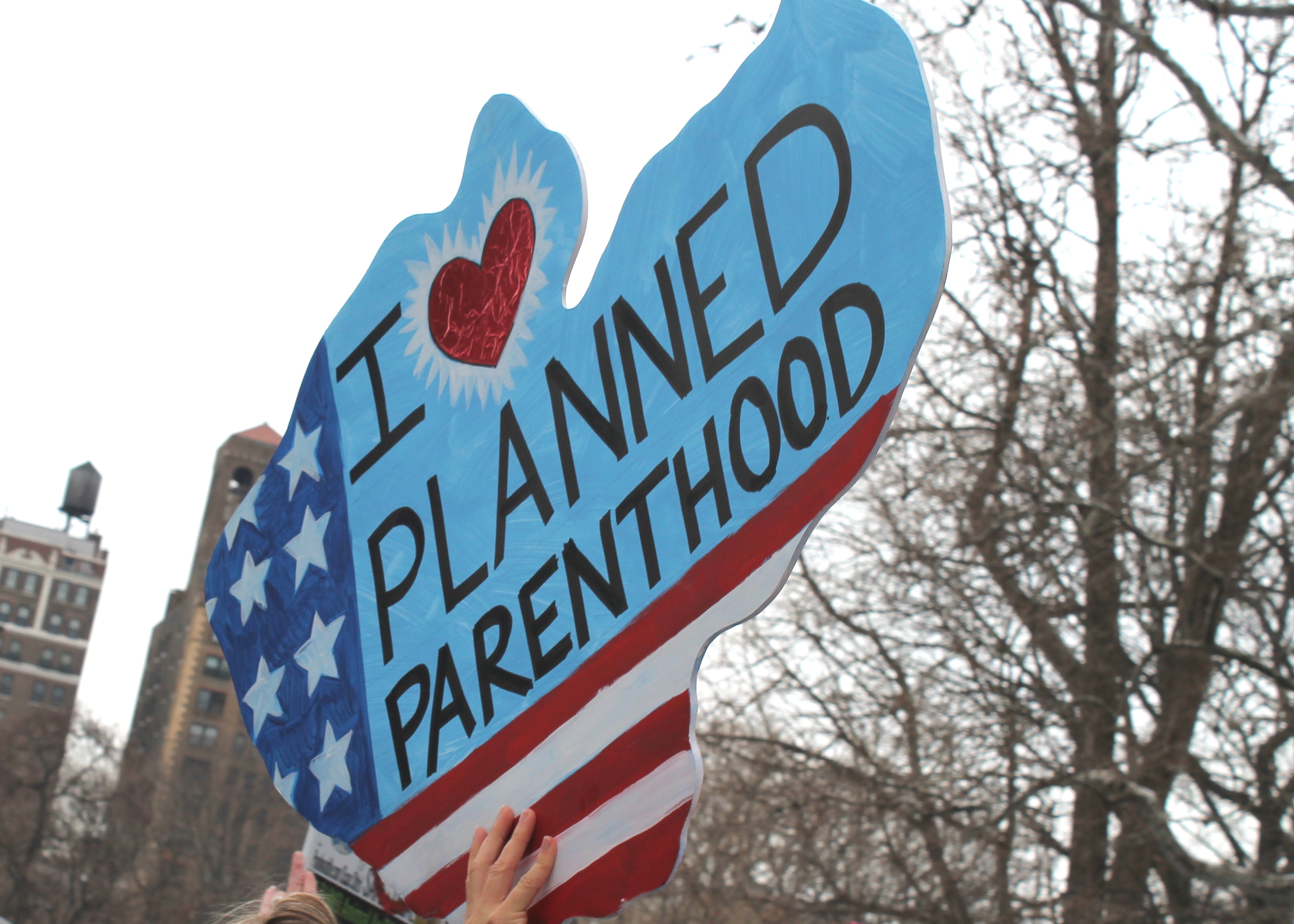 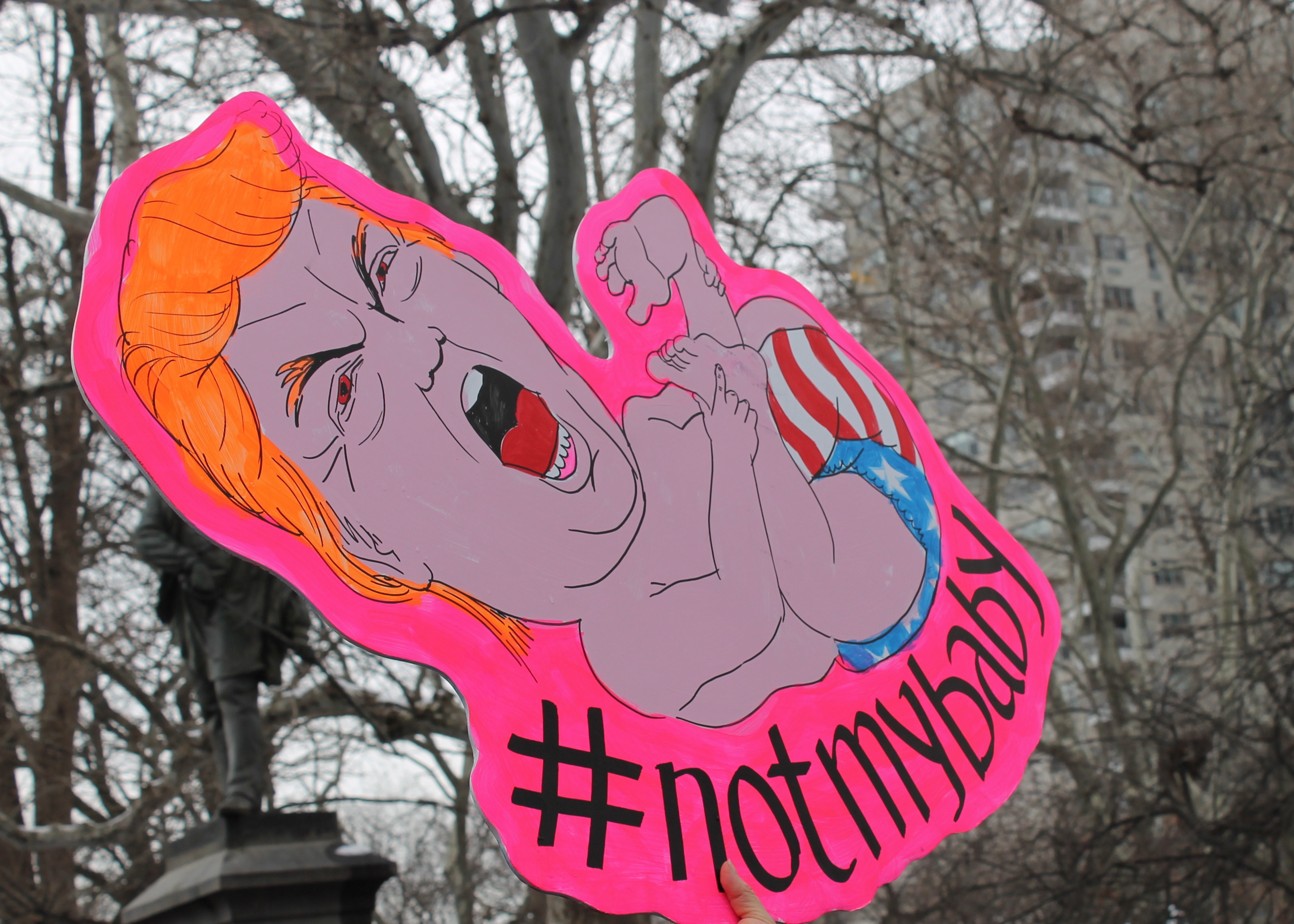 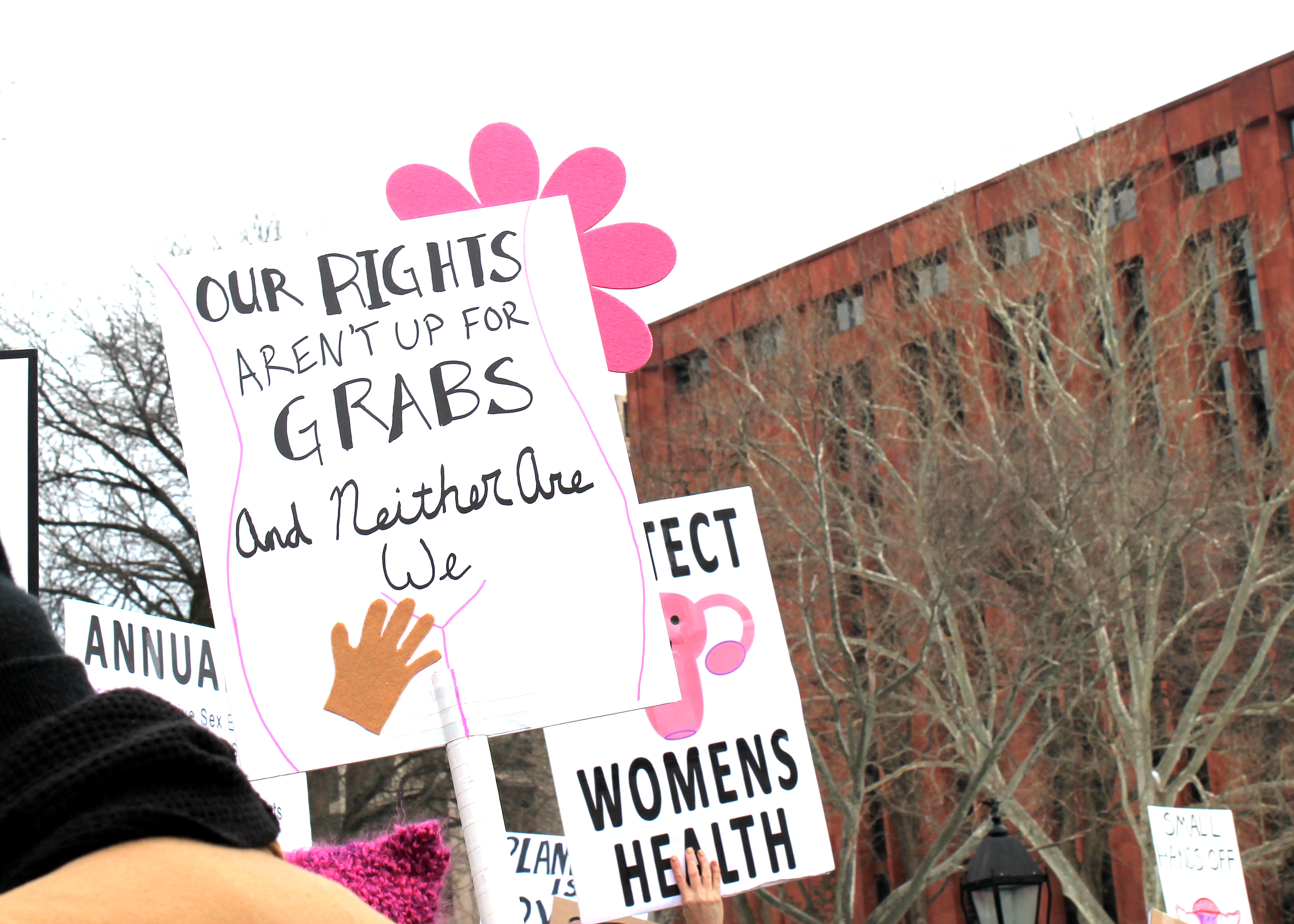 Our Rights Aren't for Grabs 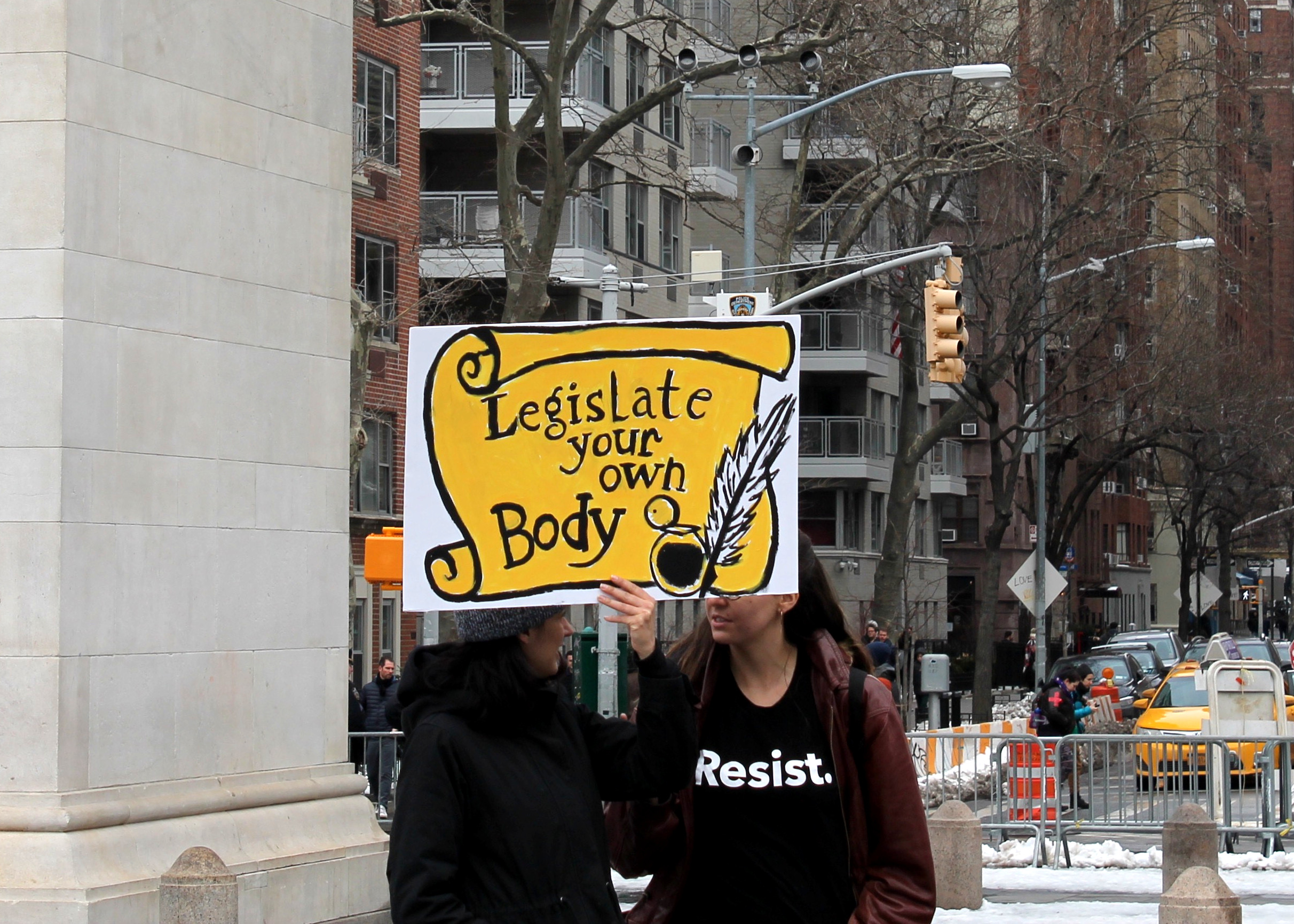 Legislate Your Own Body 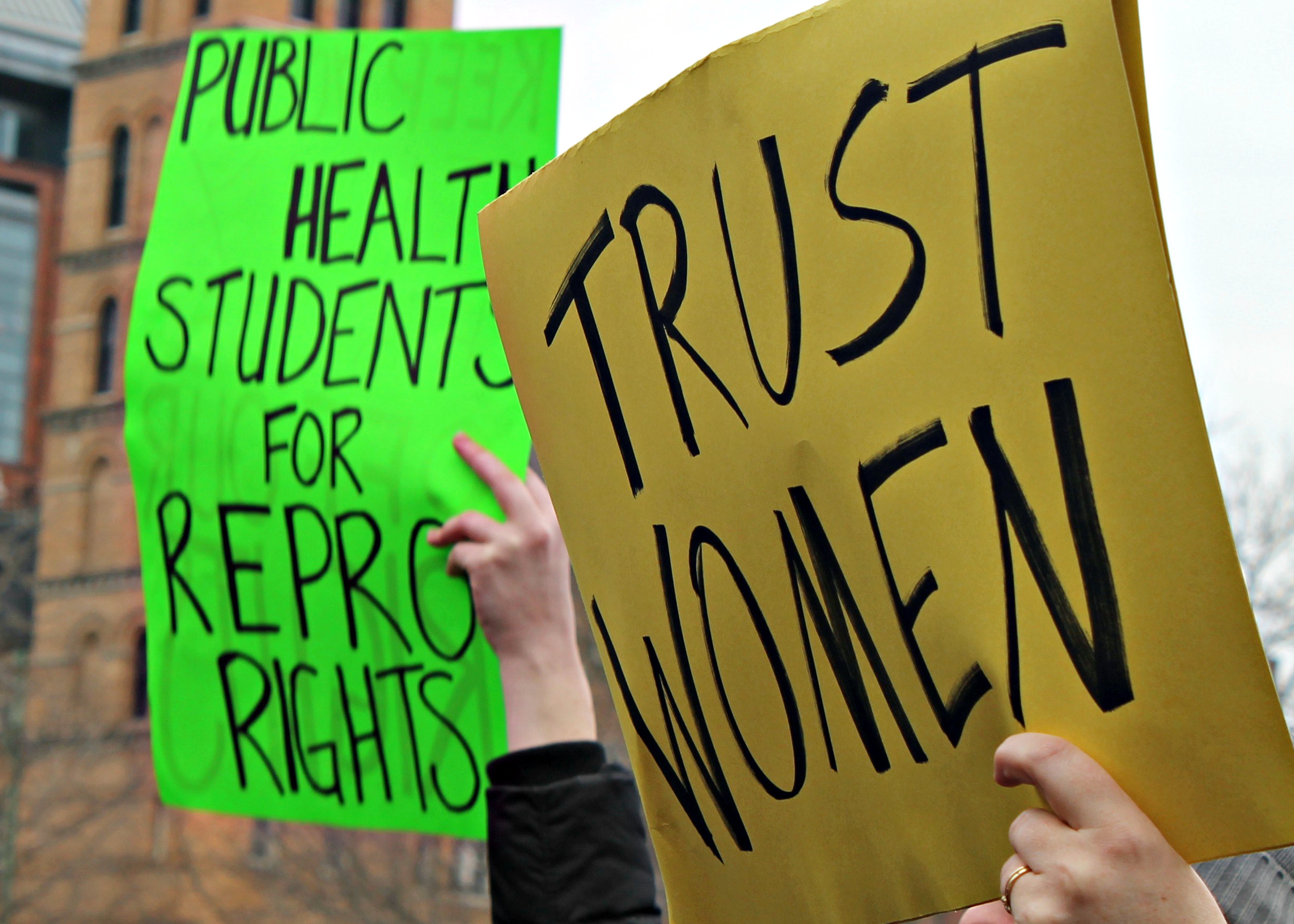 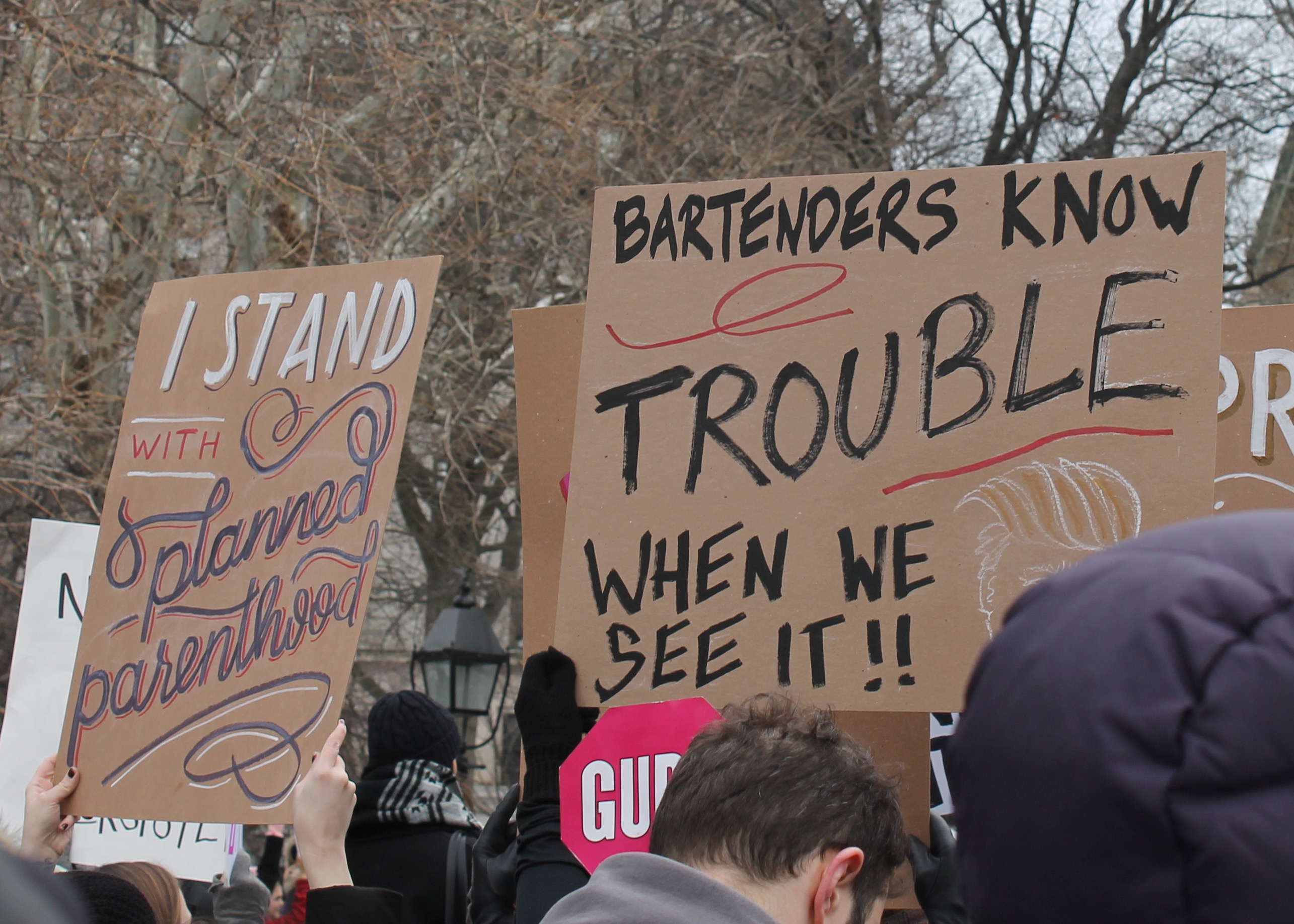 I Stand with Planned Parenthood 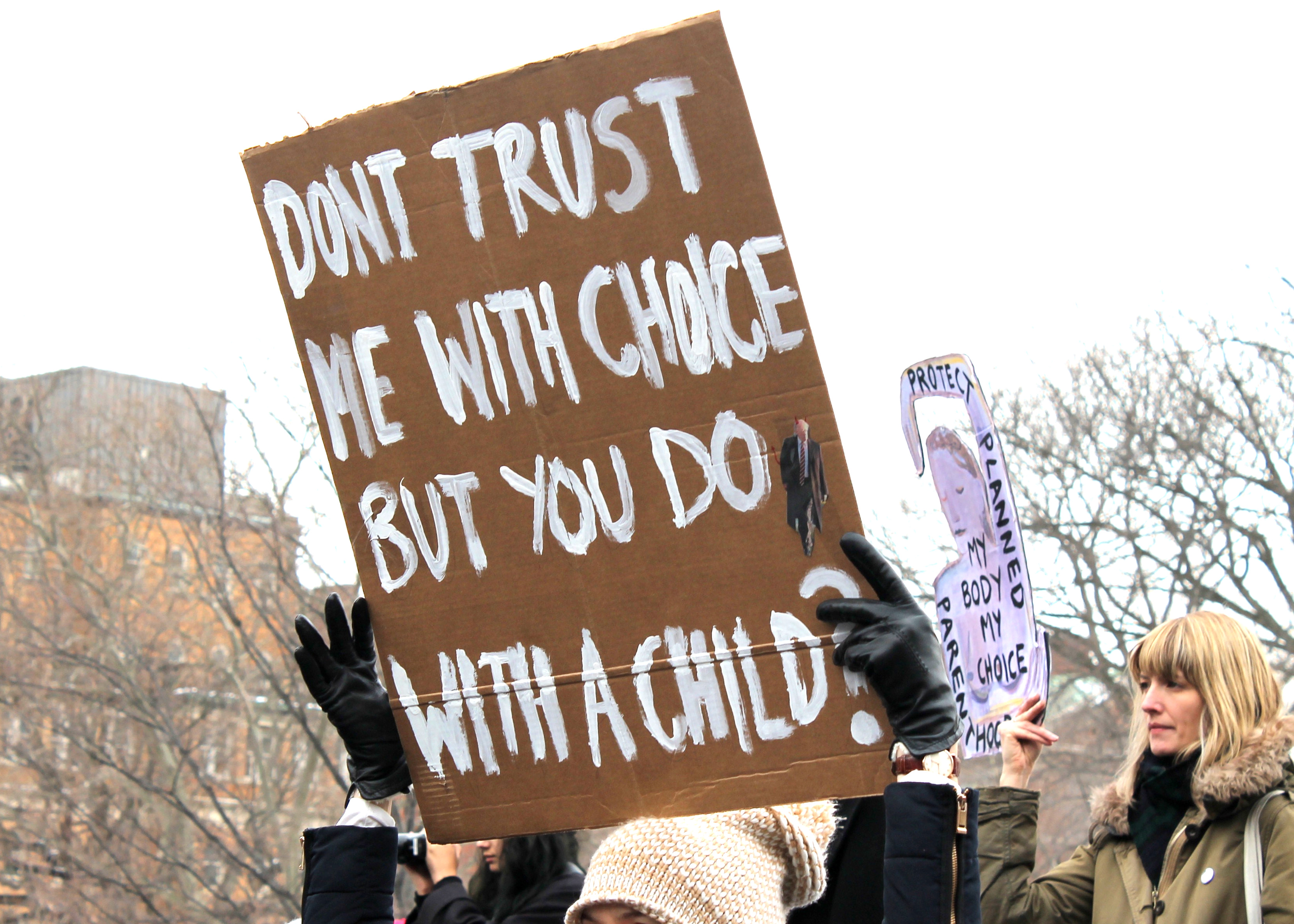 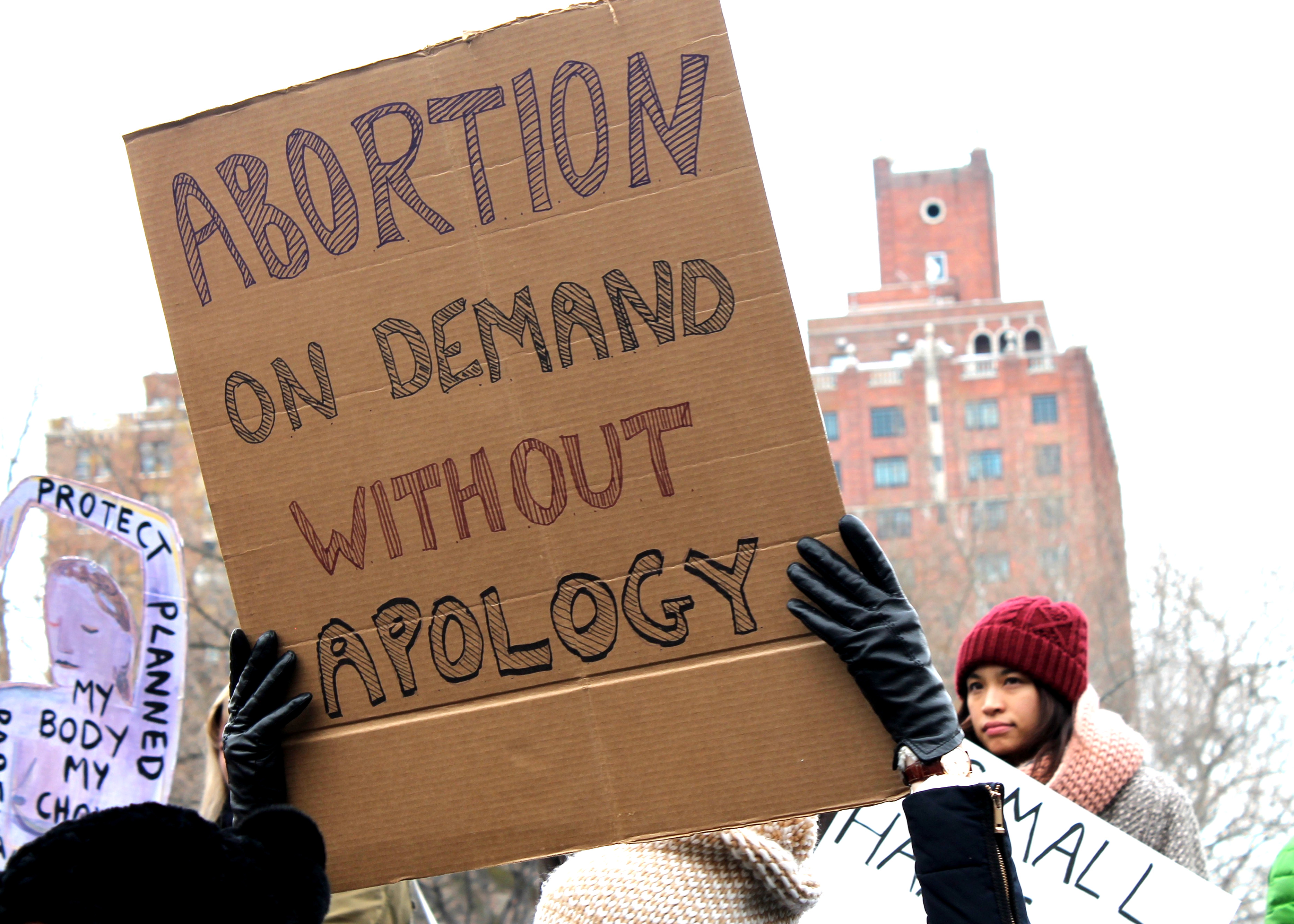 Abortion on Demand Without Apology

Right Side of History 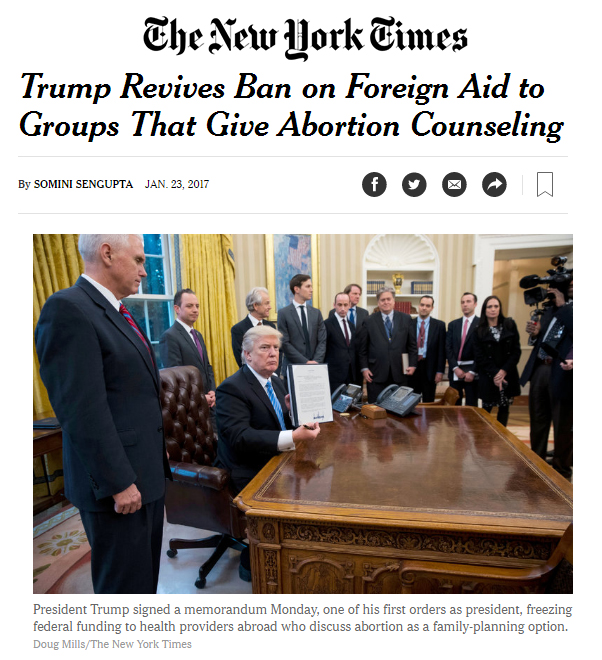 Akila Radhakrishnan, GJC Vice President and Legal Director, responds to an article in the New York Times, “Trump Revives Ban on Foreign Aid to Groups That Give Abortion Counseling”.

[NEW YORK] –  Yesterday, Donald Trump re-instated the Global Gag Rule, as every Republican president since Ronald Reagan has done since taking office. Unlike his predecessors, Trump far expanded the reach of the Gag Rule.

[NEW YORK] –  Today, Mr. Trump reinstated the Global Gag Rule, an executive policy that extends Congressional abortion restrictions on foreign assistance by barring US foreign aid from going to any foreign organization that performs or provides information about abortions as a method of family planning.

GJC Statement on the Anniversary of Roe vs. Wade

[NEW YORK] –  Today marks the 44th anniversary of the Supreme Court decision in Roe vs. Wade, two days after the inauguration of Donald Trump, and one day after millions of women all over the world marched in support of women’s rights. Any moment now Mr. Trump is expected to reinstate the Global Gag Rule, which bars US foreign aid from going to any foreign organization that performs or provides information about abortions as a method of family planning.

GJC Statement on the Inauguration of Donald Trump

[NEW YORK] – Today, as Donald Trump is sworn in as the 45th President of the United States, it is important to remember that no one—and no country—is above the law. Over the course of his presidential campaign, Mr. Trump has expressed his attitude on a range of issues, from abortion to immigration to torture, that are antithetical to the notion of human rights. Many of his proposed policies, if enacted, would put him or the US in violation of international law.

How the Helms Amendment Hurts Women Raped in War 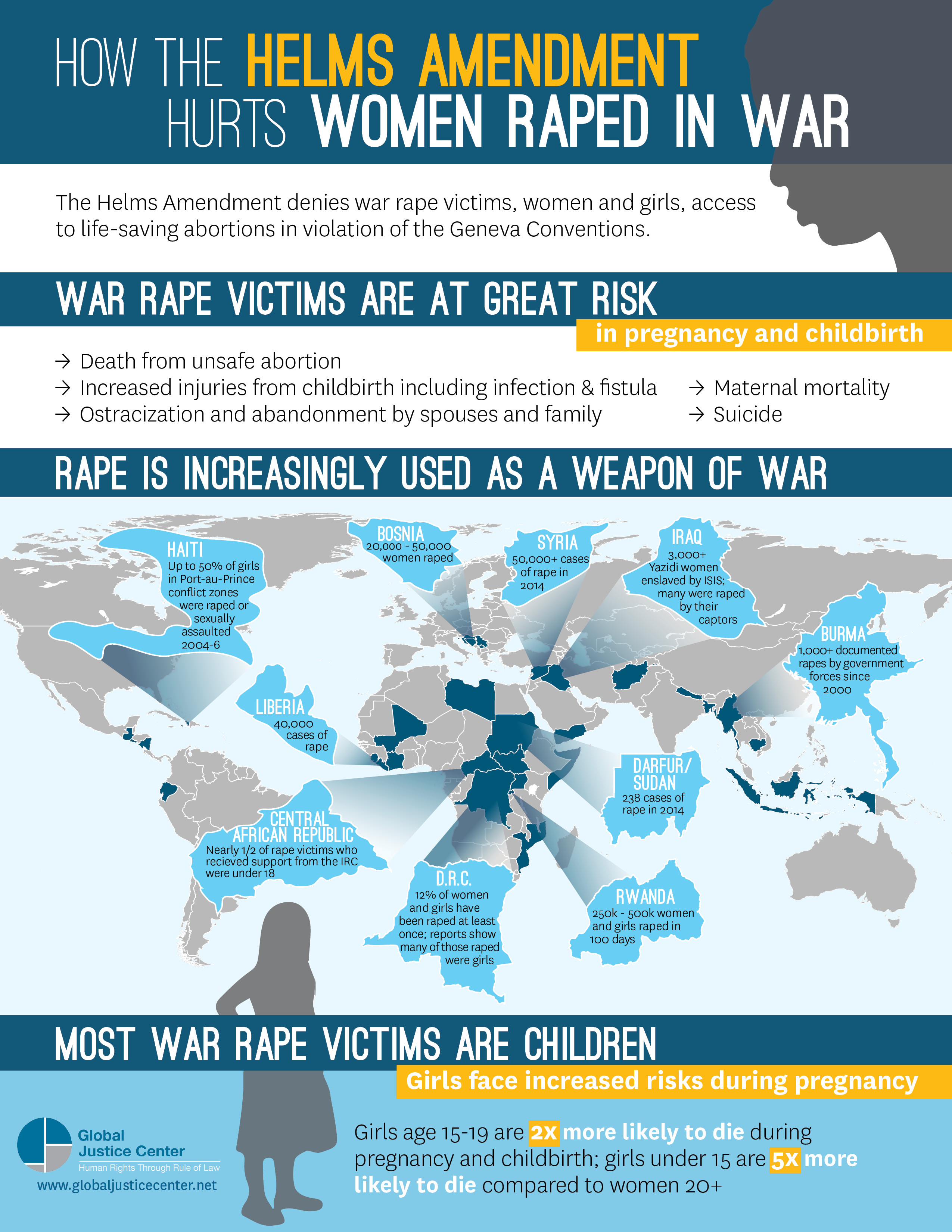 What does “One Humanity” mean for victims of war rape around the world? 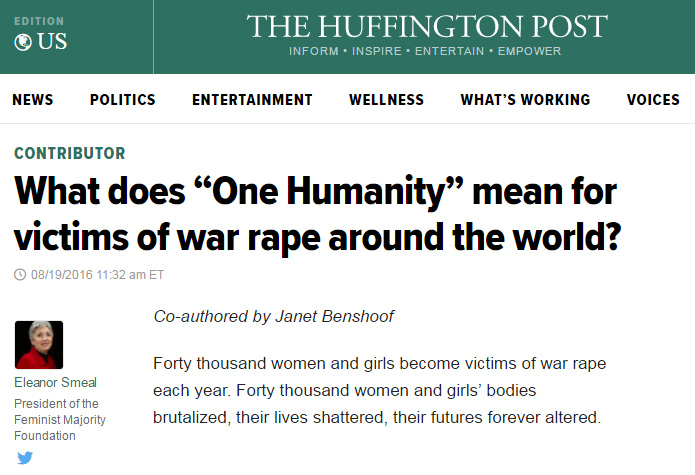 How Seven Words Deny Abortions to Women Raped in War

GJC Staff Attorney Grant Shubin wrote an article in Ms. Magazine on the devastating effect of the Helms Amendment on women and girls in war zones.

Since 2011, the Syrian civil war continues to inflict irreparable harm on its civilian population and has resulted in over one quarter million civilian deaths. A disturbing and specific factor of the Syrian conflict is the brutal and systematic use of rape and other forms of violence against women. Rape ­– whether perpetrated by ISIS militants, the Damascus regime, or other rebels, is a fate far worse than death for many Syrian women.

In Latakia, a woman reportedly committed suicide because was unable to abort an unwanted pregnancy. Another woman was thrown off a balcony by her own father after he found out she was pregnant as a result of gang rape. Countless other women provided testimony that speaks to the gravity of the violence inflicted on their bodies, be it as an act of genocide, seen with Yazidi women kidnapped by ISIS, or as a weapon of war to destroy and divide rebel communities in opposition of the Assad regime.

The Syrian conflict is considered the “largest humanitarian crisis of our time,” according to USAID. A recent report from the Syrian Refugees Website, a project of the Migration Policy Centre at the European University Institute in Florence, indicates that there are about 11 million refugees and over 13.5 million civilians in need of humanitarian aid.Babatunde Osotimehin, executive director of the United Nations Population Fund (UNFPA), wants to direct more international aid towards assisting women and girls, who he describes as “the most vulnerable and the ones who suffer most.” Women and girls, he further notes, are facing a campaign of widespread rape combined with a woeful lack of reproductive health services.

An estimated 500,000 pregnant Syrian women remain in the war-torn country or are in nearby nations. More than ever, access to abortion services is a critical form of medical care for these wartime rape victims, as well as protected right under the Geneva Conventions. Yet safe abortion services remain woefully lacking. Post-abortion care (care that’s required when women have undergone unsafe abortion procedures), has been identified as one of the major challenges in refugee camps.

Misallocation of funds is partly to blame, which Osotimehin concedes is due to the prioritization of providing food, shelter, and water over “women’s issues.” The resulting gendered bias towards issue-areas renders the discussion of “the dignity, the welfare, and the security of women (…) something that doesn’t play out at all” in donor nations discussions according to Osotimehin. The resulting impact this bias has had on dictating how to address and allocate humanitarian aid is devastating.

Another reason that fewer rape victims are receiving the essential medical care they need is that nearly all the major humanitarian groups in Syria, including UNFPA, are subject to American anti-abortion restrictions on humanitarian aid. The United States, through USAID, continues to be the largest government donor to the Syria crisis, with contributions of nearly $5.6 billion, between 2011 and 2016, matching the next three largest donors’ funding combined. This US monopoly limits in large part the services humanitarian aid providers can make available and equipment they can buy with US funds,

This summer, the Democratic Party, in a historic first step, has included in its platform a vow to overturn all domestic laws that impede a woman’s access to abortion, including the Helms Amendment. The reversal of this ban would allow US foreign aid to be used for abortions and other reproductive medical care desperately needed by thousands of women in Syria and throughout the world.

This year is the 67th Anniversary of the Geneva Conventions. We must reflect as a nation on both the historical legacy, as well as the ongoing protections the treaties afford civilians in conflict. In its inception the Geneva Conventions sought to define the scope of international humanitarian law by regulating armed conflict in service of offering combatants and civilians unalienable protections.

Just as the Geneva Conventions, and their application, have expanded over time in recognition of the evolving nature of armed conflicts, so too must convention signatories commit to modifying domestic policies that obstruct adherence to the treaties’ binding obligations. Such obligations include providing the right to all necessary medical care, which includes access to abortion services for war rape victims.

It is President Obama’s last opportunity to seize this call to action and pass an Executive Order that lifts the Helms Amendment restrictions and recommits American policy to its humanitarian legal obligations. USAID has already recognized the gravity of the Syrian crisis, both in terms of policy commitment and total aid donations. Now, with the support of the new democratic platform, it must incorporate a gender-sensitive commitment to the women of the Syrian crisis in its aid packages, which must include abortion services as obligated by the Geneva Conventions.

43 years later, “Senator No” still impacting the lives of women and girls around the world.

By the time Republican Jesse Helms ended his 30-year Senate career in 2003, his opponents and allies had long-since named him “Senator No.” From deriding civil rights reformers as “moral degenerates,” (noting their opposition to “the purely scientific, statistical evidence of natural racial distinctions in group intellect,”) to fervently opposing AIDS research and the Americans with Disabilities Act (ADA), Helms did indeed oppose most progressive ideas. It was therefore no surprise that he found himself as one of the loudest voices of the anti-abortion backlash against the Supreme Court’s 1973 Roe v Wade ruling that recognized a woman’s constitutional right to abortion.

Helms - a college dropout and television commentator who grew up poor in North Carolina – had just been elected to the Senate when the Supreme Court handed down its landmark Roe v Wade decision. A product of the 1960s feminist movement, Roe v Wade considered state-level abortion bans and restrictions. In their 7-2 ruling, the Supreme Court found that a Texas law criminalizing abortion violated a woman’s constitutional right to privacy – a decision since seen as a foundational victory for the US reproductive rights movement.

This expansion of women’s rights angered conservative senators – and Jesse Helms especially so. The years he had spent denouncing American liberal ideas and programs on North Carolina television – once lambasting Social Security as “nothing more than doles and handouts,” - should have provided the public with a hint of what was to come.  Buoyed by the reignited anti-abortion movement, Helms wasted little time finding ways to challenge and oppose women’s advances in reproductive rights.

He soon sponsored, and Congress passed, a bill named the Helms Amendment to the Foreign Assistance Act. The Amendment, seeking to limit US involvement in overseas abortions, prohibited US foreign assistance funding of programs engaged in the provision of abortions as a “method of family planning.” Even programs that merely sought to “motivate or coerce,” someone to perform such abortions were banned. Helms had thus scored one of his early Senate victories by limiting women’s access to abortions – medical interventions the effects of which, he opined in his 2005 memoirs, were “another kind of holocaust.”

Undoubtedly a defeat for the reproductive rights movement, few could foresee the Helms Amendment’s devastating effects. While the inclusion of “family planning,” suggested that abortions in other cases – rape or incest, for example – would be allowed, the amendment’s interpretation by the Bush Administration disregarded “family planning,” thereby instituting a total ban on all foreign aid funding of abortions, an interpretation the Obama Administration continues.

43 years after “Senator No,” passed the Helms Amendment, its effects are still being felt. Despite international law establishing non-discriminatory medical care as a right, the US still refuses to provide abortions to girls and women raped in war – who are considered individuals seeking abortions for other reasons than “family planning.” This means that the Yazidi women sexually enslaved by ISIS, for example, risk death or an uncertain future in the face of the US ban.

Recognizing that #HelmsHurts, the Global Justice Center recently launched a White House petition to change the Helms Amendment; we ask President Obama to take steps through executive action to allow for US funding of abortions for war rape victims.

Say no to the #HelmsLegacy: sign and share the petitionand help women and girls around the world get access to the lifesaving medical care they deserve.