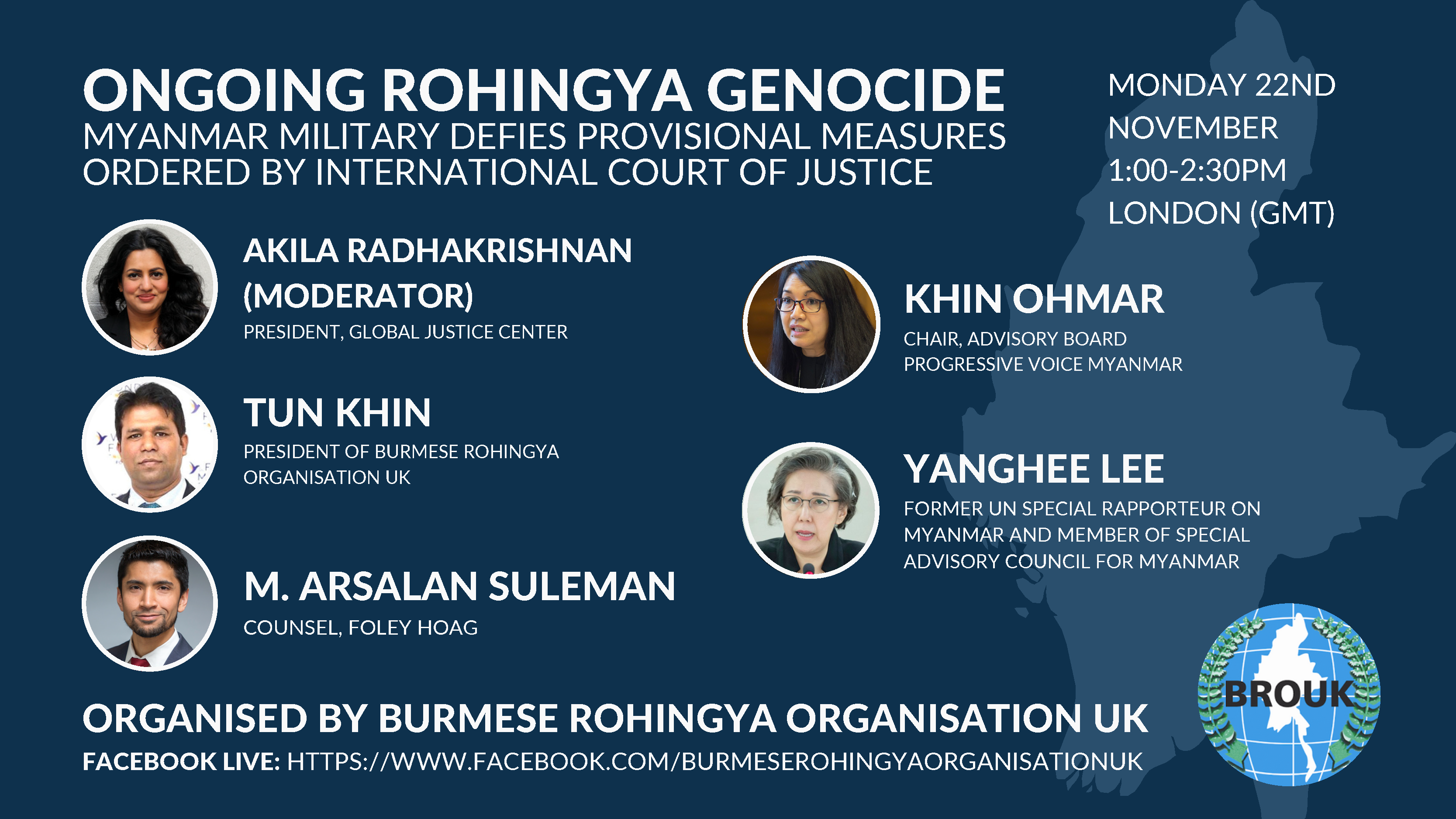 The BURMESE ROHINGYA ORGANISATION UK (BROUK) is conducting a webinar discussion on the “Ongoing Rohingya genocide Myanmar military defies provisional measures ordered by International Court of Justice,”on Monday 22 November, from 13:00-14:30, London time. This webinar will provide an opportunity to hear from some leading Rohingya, Burmese and international experts on the scope for justice and accountability for the Rohingya, and all people in Myanmar.

The discussion is extra relevant as it takes place on the same day as the six-month report-back deadline for Myanmar to the International Court of Justice (ICJ) in the Rohingya genocide case, brought by the Gambia. Myanmar is obliged to report every six months to the ICJ on its fulfillment of the provisional measures laid down by the court in January 2020, to prevent further acts of genocide against Rohingya people.

BROUK will also launch its new report on the ongoing Rohingya genocide at the meeting.

The 14 undersigned civil society organisations mark the conclusion of the UN General Assembly’s (GA) 76th Third Committee session with the following observations on both thematic and country-specific resolutions. We urge all States to implement the commitments they have made in the resolutions discussed below to their full extent.

We welcome the joint statement on reprisals led by the UK and joined by a cross-regional group of 80 countries (5 more than last year), calling on all States and the UN to prevent, respond to, and ensure accountability for intimidation and reprisals against those who engage or seek to engage with the UN.  We also welcome the resolution adopted at the Human Rights Council in September 2021 on reprisals, inviting the SG to submit the report presented annually to the Council also to the GA from next session.

We welcome the biennial resolution on human rights defenders focussing on the critical role defenders play in response to the COVID-19 pandemic, and the challenges faced in that regard. We also welcome elements on legal frameworks for their protection and the responsibilities of business. While we are encouraged by enhanced references to surveillance and counter-terrorism measures being used against defenders, we are disappointed that stronger language did not make it into the final text, despite support from civil society and some States. However, we hope that the consensus outcome and 85 co-sponsors, provides a basis for meaningful progress on these issues, and greater protection of defenders.

We welcome the adoption of the resolution on Policies and Programmes involving Youth by consensus, recognizing the need to fulfill young people’s human rights and as key actors for sustainable development, while acknowledging their important role in decision making processes. The resolution stresses the need to tackle barriers limiting their participation and development, such as unemployment, poverty, gender inequality, multiple and intersecting forms of discrimination, HIV/AIDS, SGBV and access to technology. We welcome the strong references to human rights and fundamental freedoms of young people, and the need to note young people’s diverse situations and conditions in national development strategies. Lastly, we welcome calls for a high-level GA plenary meeting to commemorate the 30th anniversary of the World Programme of Action for Youth with the full and effective participation of young people.

Dr Rosemary Grey (lecturer, Sydney University Law School) is an expert in gender issues in international criminal law. Her publications include 13 peer-reviewed journal articles and her monograph Prosecuting Sexual and Gender-based Crimes at the International Criminal Court (Cambridge University Press, 2019). From 8 June to 8 September 2015, she worked with the ICC Office of the Prosecutor through the Internship and Visiting Professional Programme, where she assisted with legal research on topics including forced pregnancy. Women’s Initiatives for Gender Justice (WICJ) is an international women’s human rights NGO advocating for accountability for sexual and gender-based crimes through the ICC’s work, including with conflict affected communities in Uganda, since 2004. It is the successor of the Women’s Caucus for Gender Justice (1997-2003) that brought together over 300 women’s human rights advocates and organizations in the Rome Statute negotiations. Global Justice Center (GJC) is an international NGO advocating for justice and accountability for sexual and gender-based violence and violations of reproductive autonomy in situations including Syria, Myanmar, and others. Its 2018 report, Beyond Killing: Gender, Genocide, & Obligations Under International Law, was the first of its kind to offer a comprehensive gender analysis of the crime of, and international legal obligations surrounding, genocide. Amnesty International (AI) is a worldwide movement of people who campaign for internationally recognized human rights to be respected and protected, with over 50 years’ experience documenting and campaigning against human rights violations around the world. 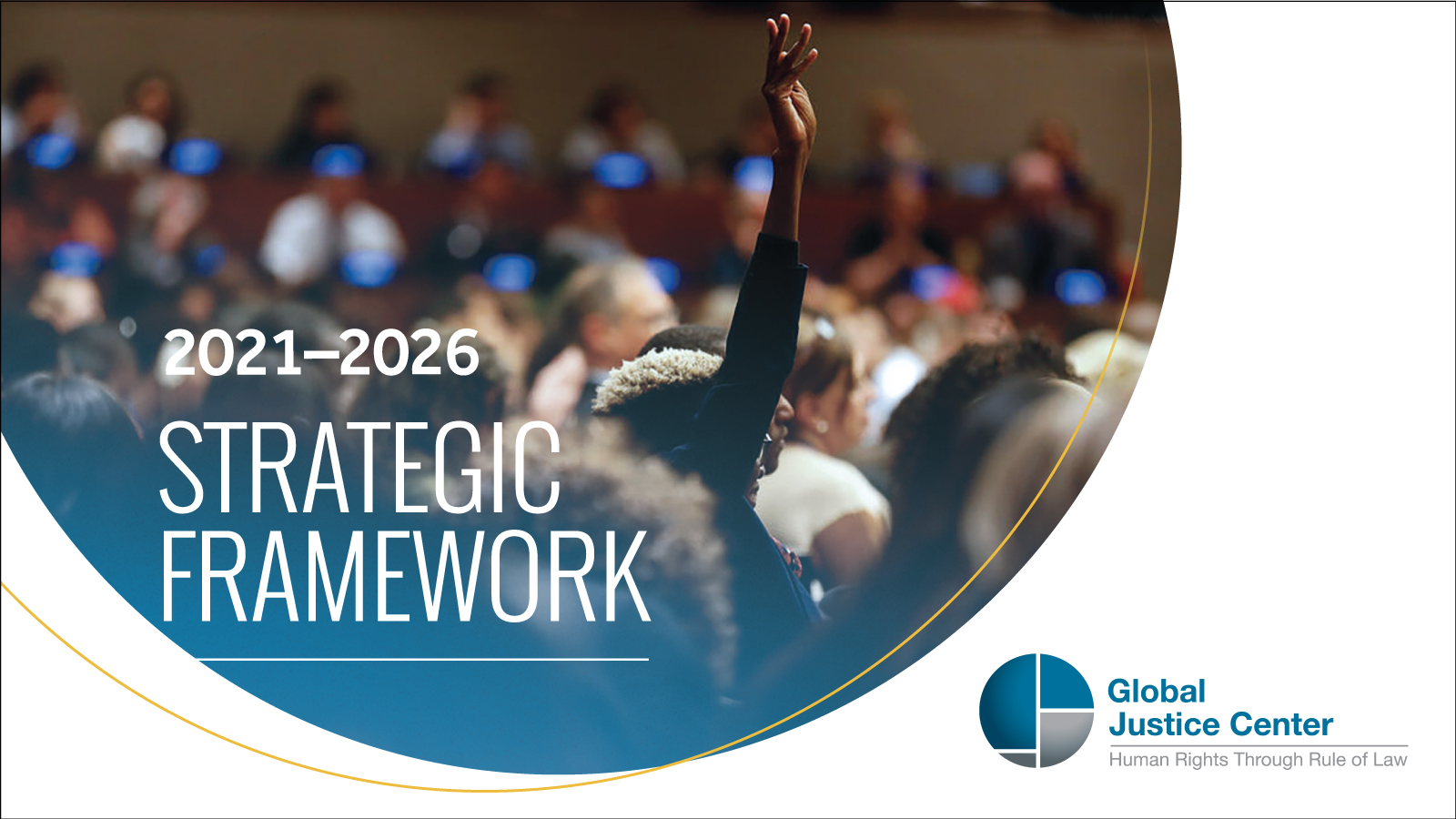 The Global Justice Center began 2021 in a global advocacy environment more dynamic and tumultuous than ever. The COVID-19 pandemic only intensified existing threats to human rights, including shrinking spaces for civil society, rising nationalism, and attempted dismantling of the international human rights system.

Despite these obstacles, advocates have made significant advances for the rights of women in recent decades. Yet the hard work of turning these gains into lived and sustainable gender equality remains unfinished. GJC occupies a critical space by identifying gaps in implementation and using a feminist interpretation of international law to transform human rights from paper to practice.

This framework will guide GJC’s work on the execution of our programs and projects for the coming five years. It encompasses both our overall programmatic goals as well our guiding principles, including our vision, mission, and theory of change. At its core, it is a constitution for GJC.

Letter from the staff committee

We are proud to present this new strategic framework not only as a blueprint for GJC’s future, but also as a watershed moment in our evolution as an organization. The last few years presented historic challenges for GJC, both internally with the loss of our founder and externally with global attacks on human rights. But these struggles have only strengthened our resolve. Over the next five years, GJC will continue our groundbreaking legal and advocacy work with a focus on three major issues critical to the achievement of gender equality: (1) a feminist multilateral system; (2) the protection of abortion access; and (3) gender-competent responses to violence.

Creating this framework challenged us to think critically about our place in the world, and how we can best leverage our skills, privileges, and expertise to achieve our vision. It also puts our progressive feminist values front and center, and gives us the flexibilty to ensure that GJC remains a dynamic organization, including in our ability to respond to new and unforeseen challenges. With this new framework in hand, GJC marches forward in the struggle for human rights more prepared and energized than ever before.

Whereas over the course of human history, millions of people, particularly women and children, have been subjected to murder, extermination, enslavement, deportation, persecution, and other atrocities that have shocked the conscience of humanity,

Whereas it was established in 1946 by the International Military Tribunal at Nuremberg that these “crimes against humanity” are crimes under international law for which the perpetrators should be prosecuted and punished,

Whereas in 2013, the United Nations International Law Commission approved the topic “crimes against humanity” for inclusion in its programme of work, and subsequently, over the next six years, proceeded to study the topic and prepare draft articles for inclusion in a possible new treaty to be negotiated and adopted by States,

Whereas in 2019, the International Law Commission adopted upon Second Reading, following input from States during the course of its work, a draft preamble, draft articles, a draft annex and commentaries thereto on the Prevention and Punishment of Crimes against Humanity, and recommended in paragraph 42 of its Report the elaboration of a convention by the General Assembly or by an international conference of plenipotentiaries on the basis of the draft articles,

Whereas in 2019, although the government of Austria offered to host an international conference of plenipotentiaries for the elaboration of such a convention, progress on the ILC draft articles has not advanced in the Sixth Committee,

Whereas crimes against humanity are among the most serious crimes in international law, along with genocide and war crimes and the absence of a treaty regulating their prevention and punishment is incongruous with crimes of comparable gravity, fueling the misconception that there is a hierarchy of importance,

Whereas a treaty on crimes against humanity would close a crucial gap in the current international framework on mass atrocities.

Whereas the absence of a treaty on crimes against humanity has a real-world consequence for the victims of atrocity crimes,

Whereas although the ILC draft articles represent an adequate baseline for negotiations, there remain a range of views on certain substantive points. The perspectives must not perpetuate an inert cycle, but rather be given the opportunity to be discussed in an inclusive, transparent, and holistic process,

Now therefore, the undersigned, urge the following in order to make real and substantive progress on the work of the International Law Commission draft articles: