Beyond Killing: Gender, Genocide, and Obligations Under International Law

Gender permeates the crime of genocide. It is woven into the perpetrators’ planning and commission of coordinated acts that make up the continuum of genocidal violence. It is through these gendered annihilative acts that perpetrators maximize the crime’s destructive impact on protected groups.

Female and male members of targeted groups, by the perpetrators’ own design, experience genocide in distinct ways by reason of their gender. Men and older boys are targeted as a consequence of the gendered roles they are perceived to inhabit, including those as heads of households, leaders, religious authorities, protectors, guardians of the group’s identity, and patriarchs. Assaults on women and girls pay heed to their roles as mothers, wives, daughters, bearers of future life, keepers of community’s and family’s honor, and sources of labor within the home. An understanding of what it means to be male and female in a particular society thus saturates perpetrators’ conceptions of their victims, and of themselves. In particular, the violence directed at women and girls during genocide is fed by existing misogynistic attitudes in society, and the traumatic impacts are magnified by the financial, social, cultural inequalities to which women and girls are subjected.

Genocide is often understood as a crime committed predominantly through organized mass killings—the majority of victims of which, both historically and today, tend to be male. Consequently, non-killing acts of genocide—more likely to be directed against female members of a protected group—are often cast out of the continuum of genocidal violence. Equally, in privileging the act of killing, other acts of violence committed against men and boys—such as torture, rape, and enslavement—have also been obscured.

The continuing failure to acknowledge the complexity of genocidal violence—and the distinct ways in which genocide is planned and committed against men and women, boys and girls, by reason of their gender—has undercut the development of an effective framework to mobilize the Genocide Convention’s legal obligations to prevent and punish genocide. It has limited political, diplomatic, and military authorities’ capacity to recognize where there is a serious risk of genocide occurring, and to identify and suppress genocides that are in progress. This has particular consequences for female victims, who are often subjected to a wider range of violations that occur over a relatively longer span of time.

Prosecutors have been more likely to charge genocide in situations where mass killings have occurred, while non-lethal genocidal acts—perpetrated disproportionately against female victims—are more likely to be indicted as crimes against humanity or war crimes, or not at all. These prosecutorial decisions, and the judgments that follow, eclipse substantial parts of the community of genocide victims, mirroring the attempted erasure that the perpetrators of genocide intended, and distorting the historical record borne out of the trials.

In the decades that have elapsed since the signing of the 1948 Genocide Convention, the red thread of genocide has continued to course its way through human history, calling into question the international legal order. A failure to grapple with the intrinsic role that gender plays the crime of genocide has undercut the progressive framework for understanding and action offered by the Convention. One cannot prevent and punish what one does not recognize.

A gendered analysis is essential to illuminate the multi-dimensional nature of this crime, and the gamut of its victims. In this way we recognize, remember, and protect all those whose lives have been, or may still be, ripped asunder by the scourge of genocide. 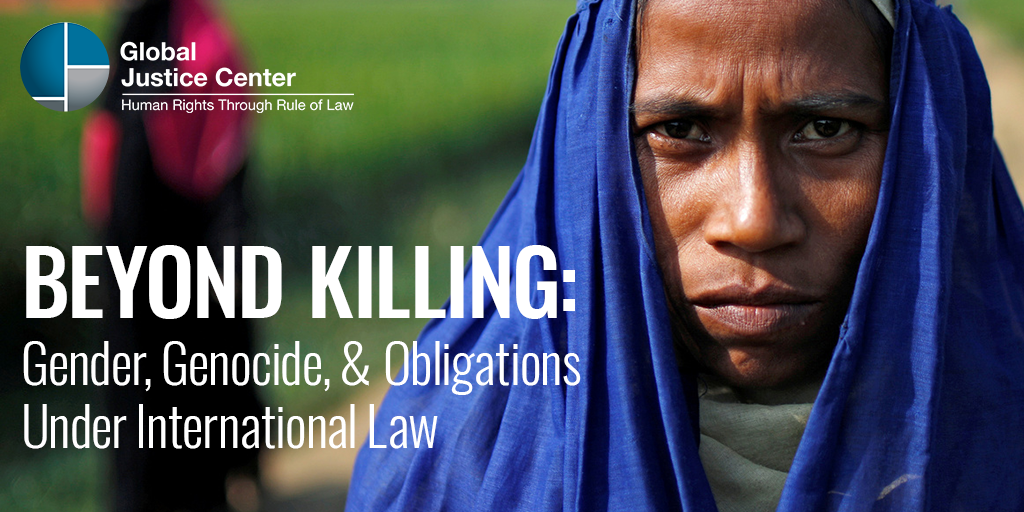