On Tuesday the Nigerian Army declared its success in rescuing almost 300 girls and women from terrorist organization Boko Haram. Many false reports have been leaked previously, as is expected given the extensive coverage of the large-scale abduction of the Chibok girls over a year ago. However this report has been confirmed several times. The famous Chibok school girls are not among the recovered, but Nigeria has made great strides against Boko Haram in recent weeks. It is thought that these newly rescued girls had been kidnapped during some of Boko Haram’s smaller, less publicized attacks and abductions. 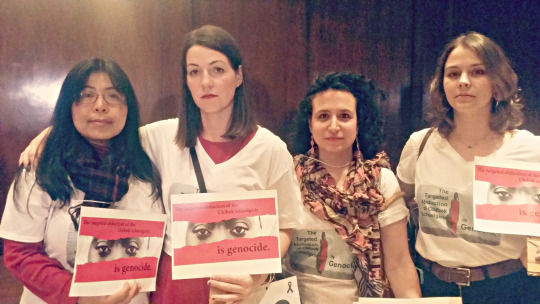 The recovery of these girls is indeed good news but Boko Haram still requires immediate attention and condemnation from the international community. During the mission to recover the girls, dozens of corpses were found in a nearby river. The actions of Boko Haram certainly constitute genocide—their ethnically and religiously killing as well as their systematic violence against women—and it is time for those actions to be treated as such. GJC advocates for continued vigilance in seeking the abducted girls and has called upon the ICC to investigate and prosecute Boko Haram in this way, ending impunity for a group that has faced few consequences and deterring other groups who practice similar illegal tactics.