Akila Radhakrishnan and Kristina Kallas publish an article in Ms. Magazine, titled "The Cruelest Weapon" on how the US denies abortions to women raped in war.

Global Policy, "The Other Red Line: The Use of Rape as an Unlawful Tactic of Warfare"

The Security Council has found that the endemic use of rape in war for military advantage – which is primarily targeted against women and girls – is a military tactic that presents a threat to global peace and security. Despite concerted global efforts over the last two decades to end its use, rape as a tool of war continues undeterred. This article links the intransigent use of strategic rape with states’ failure to treat it as an unlawful tactic of war under the rules of international humanitarian law (IHL) that regulate the 'means and methods of war’. Embedding strategic rape under IHL’s weapons framework will increase its stigmatization, a critical factor in stopping the use of abhorrent weapons or tactics in war. Other potential benefits include the opening up of civil and criminal accountability frameworks and others which provide restitution and reparations for war rape victims. This article focuses on the role of all states in enforcing the weapons framework and it calls for states to undertake an impact and injuries assessment of strategic rape under the Article 36 weapons review process.

Last week, United Nations news outlet PassBlue published the Global Justice Center’s editorial on the one year anniversary of the kidnapping of 276 Nigerian schoolgirls by Boko Haram. Our editorial identified the crimes committed by Boko Haram as an act of genocide, called “the forcible transfer of children,” as defined by the Genocide Convention. 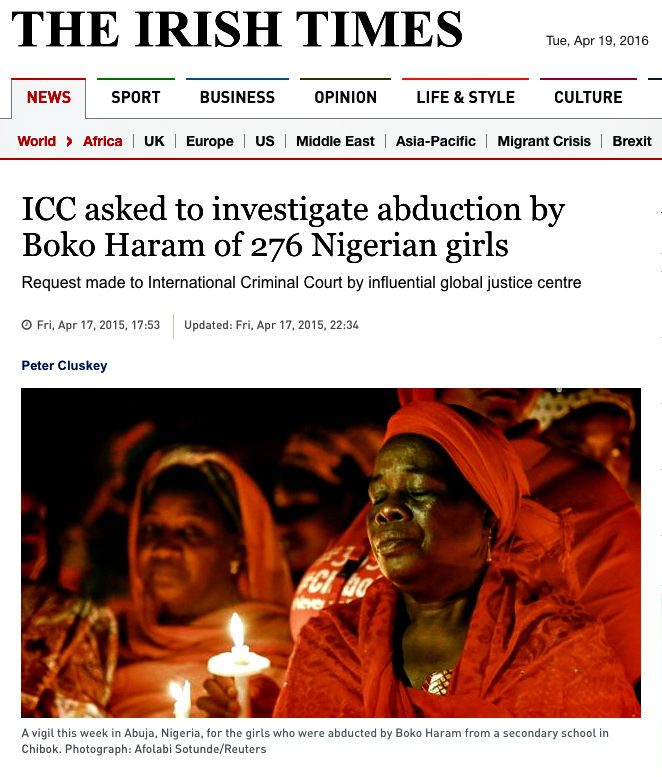 On May 17, 2015, The Irish Times wrote an article on GJC's call for the ICC to investigate Boko Haram for genocide.

GJC Featured in Coalition for the International Criminal Court's Newsletter

The CICC's #GlobalJusticeWeekly mentioned the GJC's call on the ICC to prosecute the Chibok kidnapping as an act of genocide.