Read Akila Radhakrishnan and Kirsty Brimelow's Article in The Times 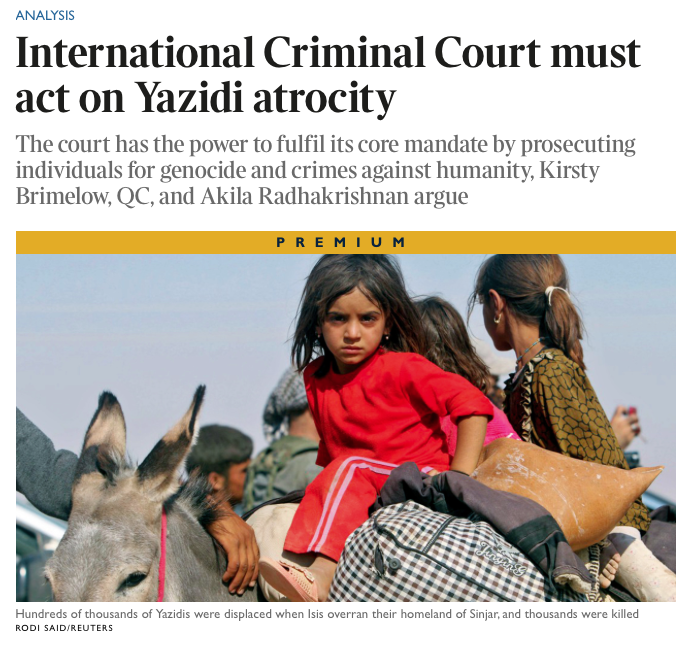 GJC Vice-President Akila Radhakrishnan and Kirsty Brimelow, QC, wrote an op-ed in The Times urging the International Criminal Court to act to fulfil its core mandate by prosecuting ISIS fighters for genocide and crimes against humanity against the Yazidi.

Today, on the three year Anniversary of Sinjar, GJC is raising awareness on the need for action and justice: 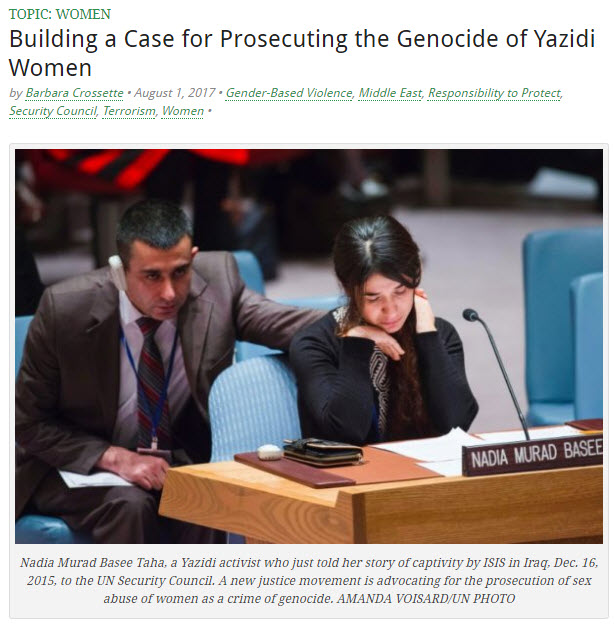 GJC President Janet Benshoof is quoted in Barbara Crossette's piece for PassBlue about the international community's responsibility to act on the Yazidi genocide. 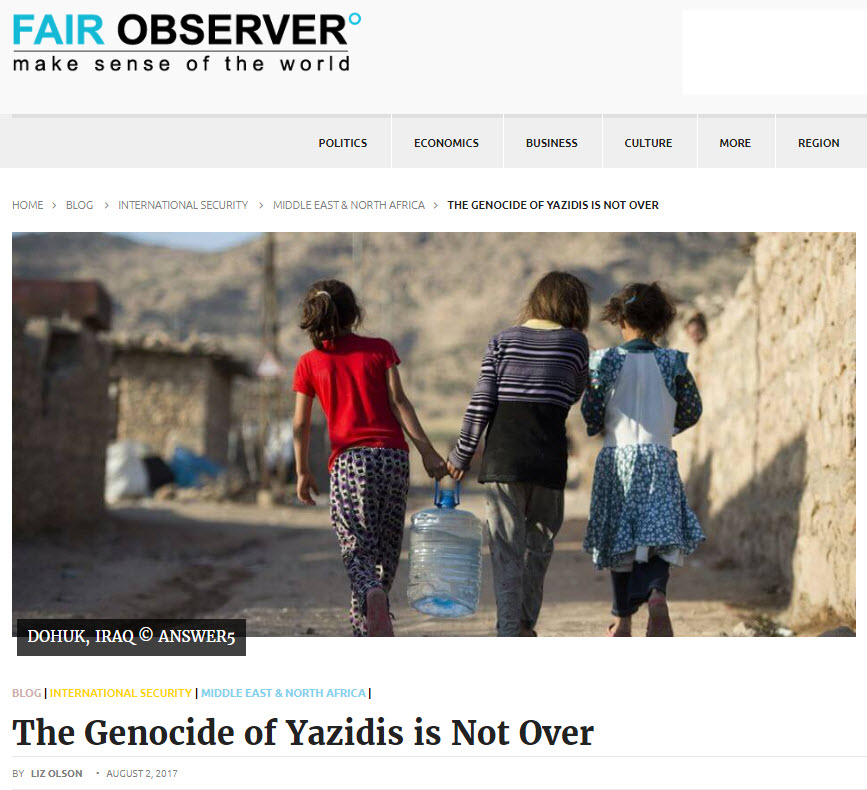 On the anniversary of the Sinjar Massacre, GJC's Communications and Development Associate, Liz Olson, wrote a piece for the Fair Observer on the Yazidi genocide. 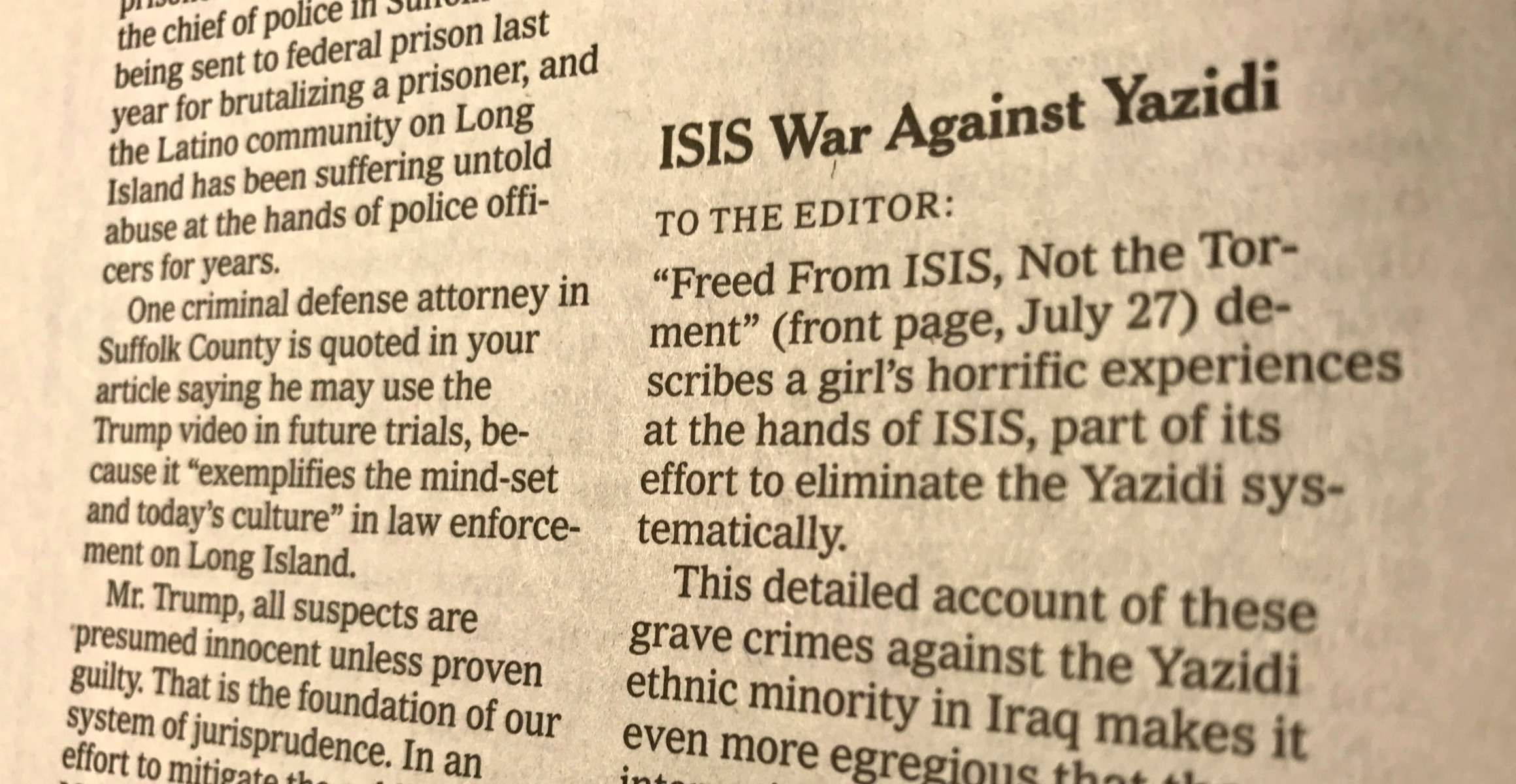 On the Third Anniversary of the Massacre at Sinjar, the Global Justice Center and Bar Human Rights Committee of England & Wales Call for Justice for the Yazidi Genocide

[NEW YORK, NY] - Today is the third anniversary of the massacre at Mount Sinjar where ISIS fighters murdered thousands of Yazidi men and enslaved thousands of Yazidi women and girls. Despite the fact that the UN and the European Parliament have accepted that crimes committed against the Yazidis constitute genocide, there has not been a single prosecution of ISIS fighters for these crimes. 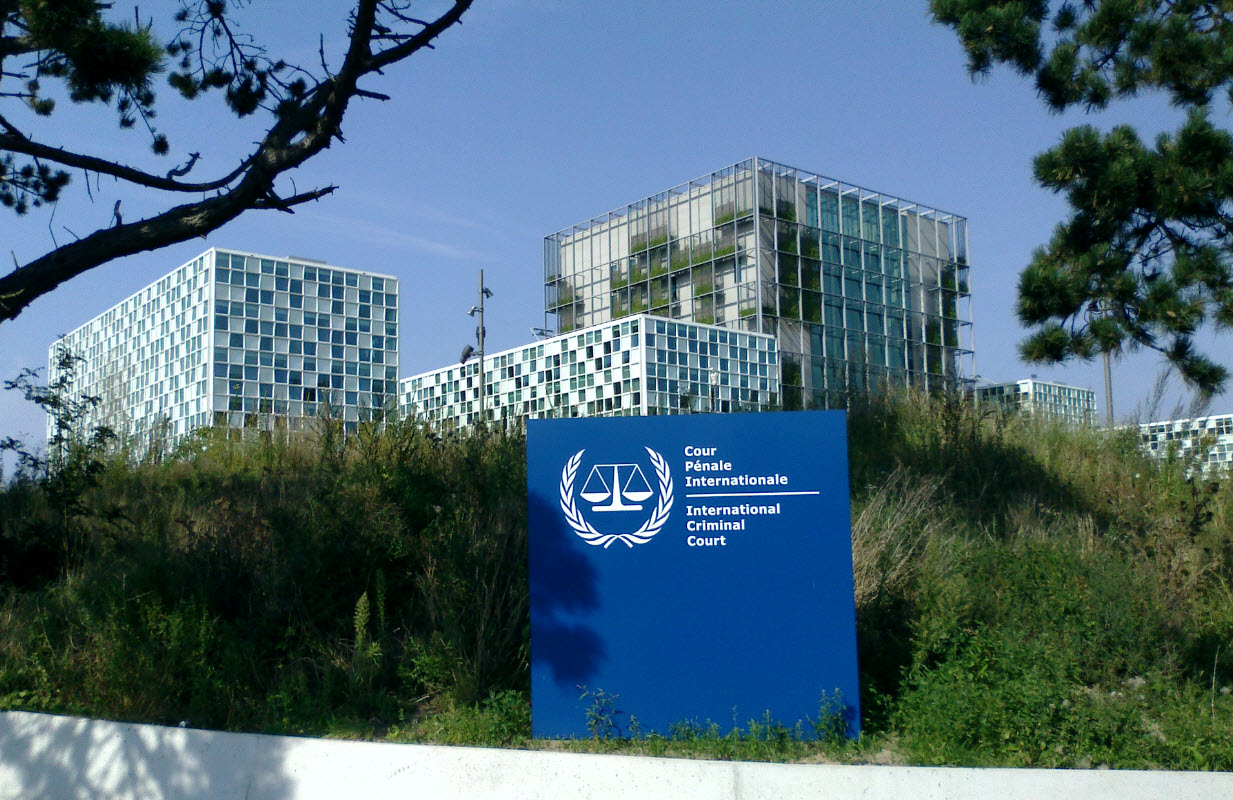 After the Holocaust, the world said “never again.” The United Nations adopted the Convention on the Prevention and Punishment of the Crime of Genocide in 1948, and 142 countries have ratified it since. But we have not fulfilled that promise to prevent and punish. Through genocides in Rwanda, Cambodia, the former Yugoslavia, Darfur and more, millions have died because the international community failed to act sooner. History views this inaction with regret and shame. We hope that we would’ve done better, cared more, acted faster. But we are not.

Right now, ISIS is committing genocide against the Yazidi, a religious and ethnic minority in Syria and Iraq. This genocide began with ISIS’s 2014 attack on Sinjar. They killed men and boys and kidnapped, trafficked and raped women and girls. Over 3,000 women and girls remain in captivity. ISIS’s enslavement and rape of these women is prosecutable as genocide under international humanitarian law. In fact, there is evidence that ISIS has committed all five genocidal crimes. The UN recognized it as genocide and urged stronger international action. Last year, the Obama administration also acknowledged that ISIS was committing genocide.

While showing good intentions is easy, it’s difficult to take action. Political interests often interfere, and the method of prosecution raises numerous questions and challenges. Counter-terrorism concerns are often conflated with or prioritized over action on ISIS’s genocide—but it is important to combat ISIS’s genocide as well as, or along with, terrorism. We do not have to choose between pursuing justice for the Yazidi and security for the rest of the world. Experts discussed this in GJC’s Brain Trust, Reconciling International Laws on Genocide and Counter-Terrorism, last month. Participants agreed that the counterterrorism framework fits today’s model of international cooperation better than the framework of the Genocide Conventions, and it is easier for prosecutors to use a terrorism lens. However, this can ignore the gendered impact of the genocide. In addition to providing justice for the Yazidi community, genocide prosecution would help delegitimize ISIS and combat its terrorism.

The World Day for International Justice should be a reminder that we need to not only recognize ISIS’s treatment of the Yazidi as genocide but also treat it as such. Inaction not only hurts the Yazidi today, but it could also worsen situations in the future. Brain Trust participants discussed how impunity could encourage future discrimination against communities like the Yazidi. It widens the gap between law and action on genocide, and sending a message that the international community can or will not act on genocide could spur similar tragedies in the future.

We are all bystanders to this genocide, and we determine whether this will go down in history as another failure to meet the legal and moral obligation to prevent genocide. Genocide is not a problem of the past; it is our problem and our opportunity to do better.

To celebrate the World Day for International Justice, GJC released a podcast on prosecuting genocide. We interviewed Stephen Rapp, a lawyer who has helped prosecute genocide, including in the International Criminal Tribunal for Rwanda, and served as the U.S. Ambassador-at-Large for War Crimes Issues in the Office of Global Criminal Justice. Listen to this episode of That’s Illegal! on iTunes or Soundcloud, and read outcomes document from our Brain Trust here.

On June 12, 2017, the Global Justice Center convened a Brain Trust of legal experts to consider how to reconcile the legal obligations to prevent, suppress and punish genocide with counter-terrorism measures directed towards ISIS.

Evidence supports that ISIS has been engaged in an ongoing genocide against the Yazidis (and potentially other groups) since 2014. Over 3,000 Yazidi women and children remain in captivity. Today we may be witnessing yet again a failure of the international community to prevent, suppress and punish genocide.

Listen to GJC's interview with Stephen Rapp,  former United States Ambassador-at-Large for War Crimes and a prosecutor for the Rwanda tribunal, who shares his insights and ideas on the prosecution of ISIS fighters for genocide in "Prosecuting Genocide," the fifth episode of our "That's Illegal!" podcast. Find us on iTunes and Soundcloud.

[NEW YORK, NY] – On the World Day for International Justice and almost three years after ISIS began a campaign of genocide against the Yazidis, the Global Justice Center renews its calls to world leaders to uphold international law and ensure justice for Yazidi women and girls.

This Submission is presented to the Office of the Prosecutor (OTP or Office) of the International Criminal Court (ICC or Court) by the Global Justice Center and the Bar Human Rights Committee of England and Wales, requesting the opening of a preliminary examination into genocide and other crimes committed against the Yazidis.

Listen to GJC staff and Sareta Ashraph, an internationally-recognized attorney and expert in the field, discuss the ongoing genocide committed by ISIS against the Yazidi in "Genocide and Justice," a two-part epsode of our "That's Illegal!" podcast.  Find us on iTunes and Soundcloud.

[NEW YORK, NY] -  Today, the UN Security Council holds its Open Debate on Conflict-Related Sexual Violence under Uruguay’s presidency. In the concept note, Uruguay reflected on the findings of the new UN Secretary-General’s report on how rape is used as a weapon of terrorism and genocide. They cited the example of the crimes Daesh is committing against ethnic minorities such as the Yazidi in North Iraq and Syria, including using rape as a non-killing crime of genocide. Yet, to date, no trial has been held to prosecute perpetrators of this ongoing genocide.

On Anniversary of Rwandan Genocide, GJC Calls on the International Community to Uphold the UN Genocide Convention

[NEW YORK, NY] - Today marks the 23rd Anniversary of the start of the Rwanda genocide when 80% of the Tutsi population in Rwanda was exterminated. Over the course of 100 days, up to a half million Tutsi women were raped, sexually mutilated or murdered. The International Criminal Tribunal for Rwanda handed down the first conviction for the use of rape as an act of genocide.

[NEW YORK, NY] - Yesterday, Jordan welcomed Omar al-Bashir, Sudan’s President, for the Arab League’s annual summit. Bashir is attending despite two longstanding arrest warrants from the International Criminal Court (ICC) for his actions in Darfur, including rape, murder, torture and extermination. He has been charged with genocide, war crimes and crimes against humanity and has been a fugitive from the ICC since 2009.

[NEW YORK] –   Today, Donald Trump signed a revised executive order extending his racist and xenophobic campaign promise—ban refugees and immigrants from largely Muslim countries. This ban is accompanied by a halt in taking in refugees and increased vetting protocols that can be used as a pretext to surveil and profile those who enter the United States.

First International Arrest Warrant for Genocide Against the Yazidi

[NEW YORK] –   This weekend, the German newspaper “Welt am Sonntag” reported that in December, the German Federal Prosecutor’s Office obtained an international arrest warrant for a high-ranking ISIS commander who according to sources was “significantly responsible to the sexual slavery of Yazidi women and girls.” The warrant for genocide and war crimes, would be the first international arrest warrant for what is an ongoing genocide against the Yazidi.

“For evil to flourish, it only requires good men to do nothing." - Simon Wiesenthal

[NEW YORK] –   Today, on the International Day of Commemoration in Memory of the Victims of the Holocaust, the Global Justice Center calls on the international community to remember Holocaust victims by standing up to renewed anti-Semitism, hatred, racism, and discrimination. The Nazi ideology of race resulted in the systematic persecution and murder of six million Jews, and other groups such as the Roma, Slavic, Communists, Socialists, Jehovah’s Witnesses, LGBTI and persons with disabilities.

[NEW YORK] –   Today, Donald Trump followed through on one of his racist and xenophobic campaign promise—ban refugees and immigrants from largely Muslim countries. This ban is accompanied by a drastic reduction in the number of refugees the US will take and a series of other undefined and vague provisions that could be used as a pretext to surveil and profile those who enter the United States.

[NEW YORK] — Today the United Nations marks the second International Day of Commemoration and Dignity of the Victims of the Crime of Genocide and of the Prevention of the Crime. On this day, as we reflect on the legacy of genocide, yet again the international community is failing to take action in face of an ongoing genocide. ISIS is committing  genocide, including through acts of rape and sexual slavery, against the Yazidi and other ethnic minorities, and the world must take immediate action to stop these atrocities.