The Risk of Mass Atrocities During a Pandemic 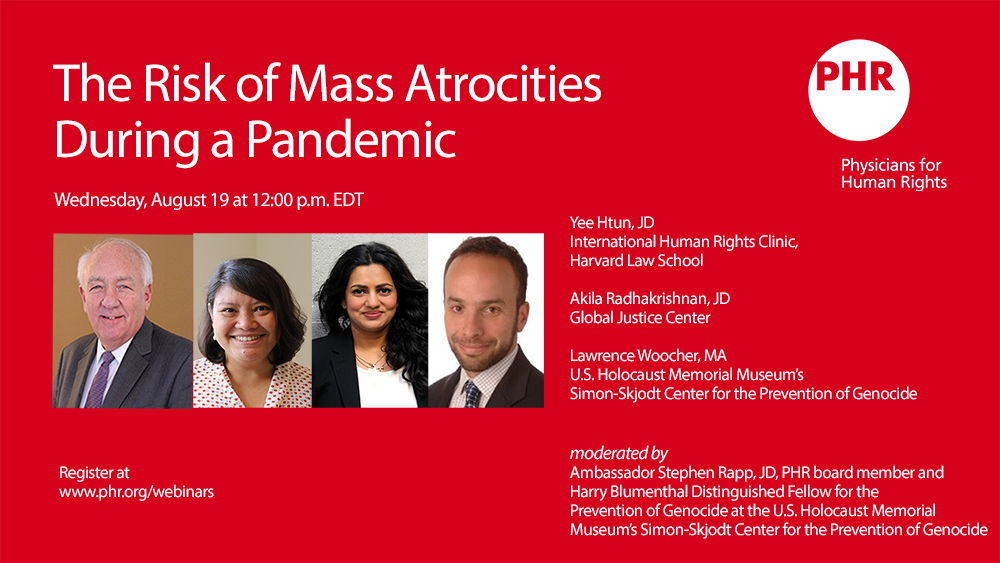 Description:
The COVID-19 pandemic poses a great threat to populations already at risk of genocide and crimes against humanity at the hands of their governments. The pandemic may be weaponized by authoritarian states as an opportunity to commit mass atrocities while attention is elsewhere or to deny certain populations their right to health.

Physicians for Human Rights (PHR) will host a conversation on the prevention of mass atrocities during the pandemic, to coincide with the August 25 anniversary of attacks by Myanmar security forces on Rohingya Muslim residents in northern Rakhine state, driving hundreds of thousands to live as refugees in neighboring Bangladesh.

Speakers:
Yee Htun, JD is a lecturer on law and clinical instructor at the International Human Rights Clinic at Harvard Law School. She fled Myanmar in 1988.

Akila Radhakrishnan, JD is president of the Global Justice Center, which works to define, establish, and protect human rights and gender equity by enforcing international laws.

Lawrence Woocher, MA is research director at the U.S. Holocaust Memorial Museum’s Simon-Skjodt Center and a lecturer at the Elliott School of International Affairs at George Washington University. He formerly served as senior atrocity prevention fellow with the United States Agency for International Development.