A Pathway to a Sustainable Solution to the Rohingya Crisis 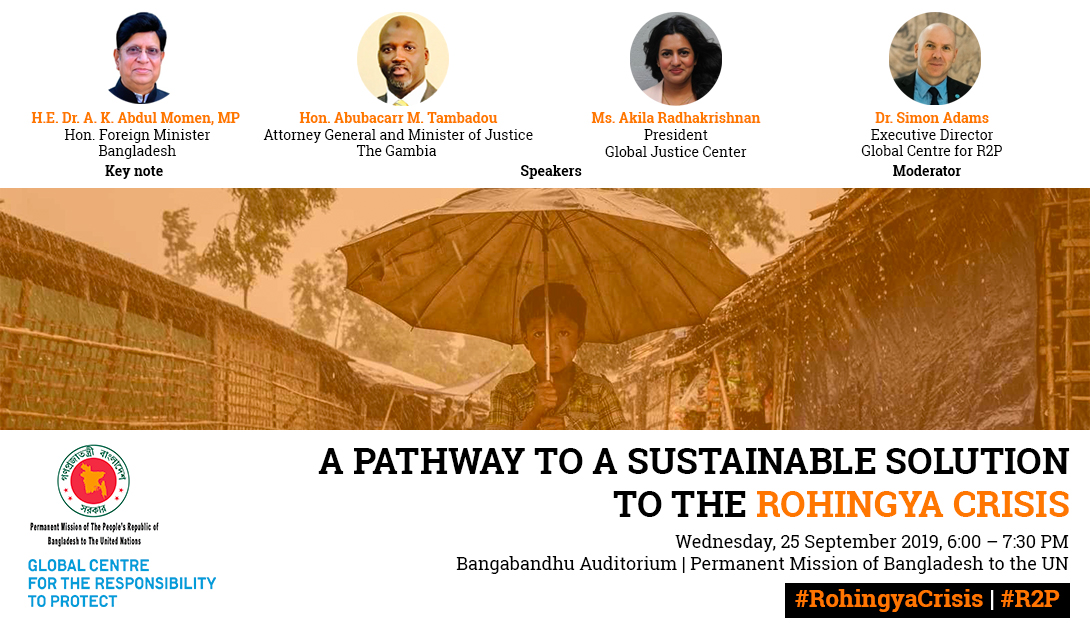 Hosted by the Permanent Mission of Bangladesh to the United Nations in partnership with the Global Centre for the Responsibility to Protect, this side event during the 74th UN General Assembly is on a sustainable solution to the Rohingya crisis. The event will address the international crimes committed against the Rohingya – genocide, war crimes and crimes against humanity – and will examine current accountability efforts, including at the International Court of Justice and International Criminal Court.

Webinar on Women in War: Stopping Sexual Violence in Conflict

Adopted in April 2019, the UN Resolution 2467 calls for a survivor-centered approach to the prevention of sexual violence against women in conflict, and emboldens efforts to strengthen justice and accountability around the issue. But how can we ensure such non-binding resolutions are actually implemented on the ground? What does a viable action plan to stop violence against women in war look like?

Hosted by the International Coalition of Sites of Conscience and the Global Action Against Mass Atrocity Crimes, this webinar will bring together experts on the subject to discuss the importance of the resolution and the equally important next steps that need to be taken to guarantee that perpetrators are held accountable, that survivors’ needs are met through a holistic range of practical and sustainable support, and that NGOs, activists and other allies can equip women with the training and networks they need to be active leaders on this issue.

Protection of Civilians in Conflict Side Event - Gender and Genocide: Engendering analysis for better prevention, accountability, and protection

In December 2018, the international community marked the 70th anniversary of the adoption of the Convention on the Prevention and Punishment of the Crime of Genocide. That same month, the Global Justice Center released its latest white paper, entitled Beyond Killing: Gender, Genocide, & Obligations Under International Law. It underscores how gender, and preconceived beliefs related to it, affect perpetrators’ planning and commission of coordinated acts of genocidal violence in order to maximize the destructive impact on vulnerable groups protected under international laws, such as the Genocide Convention.

Genocide and other atrocity crimes, by the perpetrators’ own design, affect women and men in distinct ways by reason of their gender. Women and girls are often directly targeted in non-killing acts of genocide and are disproportionately burdened by the economic and social consequences of genocidal violence, whilst men and boys are often targeted in mass killings in line with their perceived gender roles as leaders and fighters. However, there has been a continued failure by the international community to acknowledge such gender-specificity in legal frameworks for accountability for such crimes, undercutting our ability to mobilize the Genocide Convention’s legal obligations to prevent and punish genocide.

More than 70 years on, genocide and other atrocities are still committed in many parts of the world and much remains to be done to better prevent these crimes and to strengthen accountability frameworks to get justice for victims. This May, the Global Justice Center (GJC) and the International Coalition for the Responsibility to Protect (ICRtoP) would like to invite you to join us for a panel event on the sidelines of the upcoming UN Security Council debate on the Protection of Civilians in Armed Conflict to raise awareness around the need for the inclusion of a gendered analysis to illuminate the multi-dimensional nature of genocide and other atrocity-related crimes to better prevent their occurrence.

As space will be limited, please register using this form or email Ms. Liz Olson at This email address is being protected from spambots. You need JavaScript enabled to view it. by 5:00pm on Friday, May 17, 2019. A light lunch will be served. 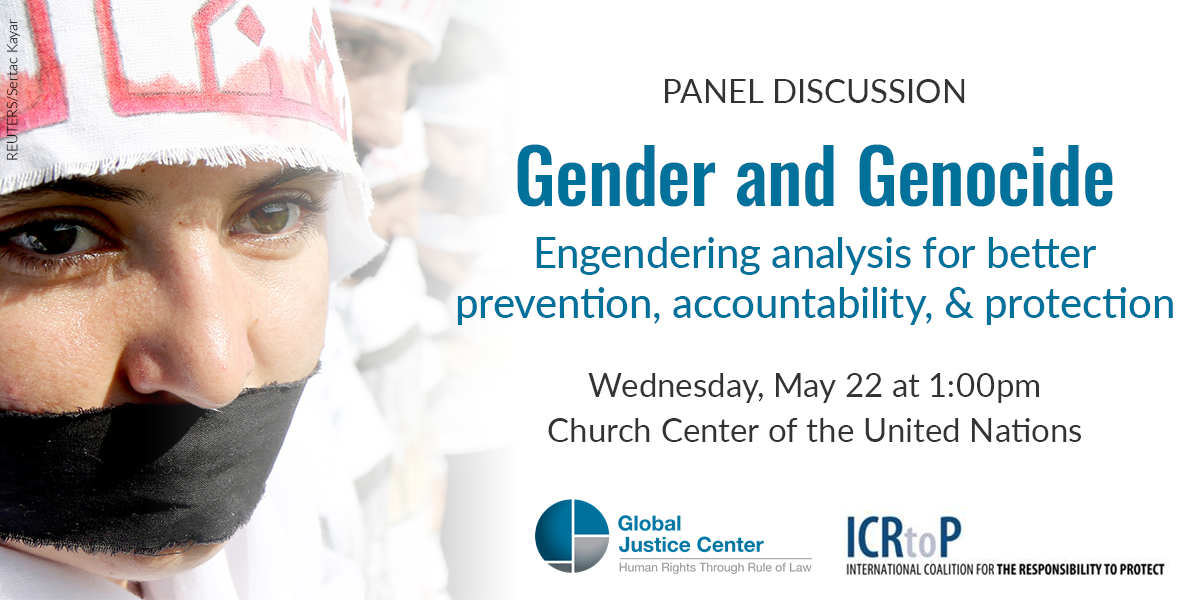 What Does a Gender Perspective Bring to Crimes Against Humanity Genocide, and War Crimes?

The event marks the public launch of the Gendered Peace project which is funded by the European Research Council. In 2014 the Office of the Prosecutor of the International Criminal Court (ICC) launched its Policy Paper on Sexual and Gender-Based Crimes to strengthen “expertise and commitment to the prosecution of sexual and gender-based crimes”.  Notwithstanding this ambition, five years on, the Court’s track record remains disappointing and it would appear that much more work must be done.

This event is designed to open up a discussion on the multi-dimensional nature of the core categories of international offences through a gender perspective to evaluate progress, identify setbacks and explore future options.  What does a gender analysis add to our understanding of these offences?  How can international criminal law better deliver on gender justice? 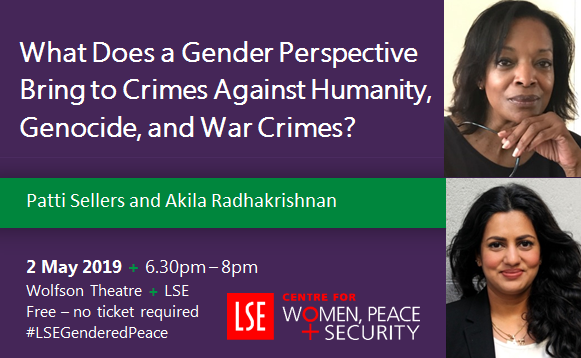 "The Prosecutors" Screening at the United Nations

The Prosecutors is a documentary that tells the story of three dedicated lawyers who fight to ensure that sexual violence in conflict is not met with impunity. Filmed over five years on three continents, it takes viewers from the Democratic Republic of Congo to Bosnia and Herzegovina to Colombia on the long journey towards justice.

The Global Justice Center is proud to co-sponsor this event alongside the Permanent Missions of the United Kingdom, Colombia, Canada, Chile and Costa Rica to the UN and Women’s Initiatives for Gender Justice. Join us for a 30-minute screening of The Prosecutors, followed by a panel about prosecuting sexual violence in conflict.