UNSRC 1325 was passed and ratified in 2000, more than 18 years later and with numerous related resolutions since, there is still a way to go to ensure the full implementation of 1325.  Human Rights violations in conflict zones are well documented and much of the vision of 1325 remains unrealized.

Young women are often subject to double marginalization – as women, and as young people. In many societies and families, they are the last to eat, to speak, to receive an education. They do not have a voice, and only speak when spoken to. With little or no education or training, young women and girls are relegated to caretaking, cooking, childbearing, collecting firewood and fetching water – the unpaid labour, which is often not regarded as important by the society, and does not provide the women with financial means of their own. Conflict aggravates this situation. We will therefore have a voice of a young woman from the NAWO Young Women’s Alliance WPS network.

States Parties, have to varying degrees, supported and implemented 1325. Hearing from them their view of success and their learning in implementation, will take forward the discourse on this important issue.

The event will provide time for discussion to learn from the expertise in the room, especially in preparation for the 20th anniversary next year.

Brain Trust: Legal Limits to the Use of the Veto

Question at Issue: Are there legal limits to the use of the veto by the Permanent Members of the U.N. Security Council blocking action in the face of genocide, crimes against humanity or war crimes? Or is the veto in such circumstances a carte blanche that can be utilized at the complete discretion of the permanent members?

Proposition: There are legal limits to the use of the veto power in the face of genocide, crimes against humanity or war crimes. Three arguments support this conclusion:

Initial Goal of Initiative: To form a group of NGOs and States who support this initiative and would be willing to work to convince the General Assembly to make this request of the ICJ.

Alternative Concept: To put some of these legal concepts directly into a GA resolution that notes the legal obligations related to genocide, crimes against humanity and war crimes, and calls for veto restraint (and not ask for an Advisory Opinion).

—Professor Jennifer Trahan, NYU Center for Global Affairs, This email address is being protected from spambots. You need JavaScript enabled to view it.

The Permanent Missions of Germany, Belgium, Dominican Republic, Equatorial Guinea, France, Kuwait, Peru, Poland, South Africa and the United Kingdom will co-host an Arria Formula meeting of the UN Security Council on the preventive impact of criminal accountability for conflict-related sexual and gender-based violence on Friday, 8 February 2019, at 10:00 am in the Trusteeship Council Chamber. The meeting will be chaired by Ms. Katarina Barley, Federal Minister of Justice and Consumer Protection of Germany.

"Sexual violence, when used or commissioned as a tactic of war in order to deliberately target civilians or as a part of a widespread or systematic attack against civilian populations, can significantly exacerbate situations of armed conflict and may impede the restoration of international peace and security." (Extract from Security Council Resolution 1820).

Members of the UN Security Council and UN Member States explore how each can more effectively integrate criminal accountability for sexual violence in conflict into the prevention agenda, including into conflict resolution, transitional justice and peacebuilding.

Global Justice Center President Akila Radhakrishnan will discuss illegal US abortion restrictions' violations of the freedoms of speech and association, including the Global Gag Rule, Helms Amendment, and Siljander Amendment.

Challenges and Prospects on the ICC's Horizon: Afghanistan, Myanmar and More

The Global Justice Center is proud to participate in this side event for the 17th Session of the Assembly of States Parties to the International Criminal Court hosted by the American Bar Association (ABA) and the International Federation for Human Rights (FIDH).

The roundtable discussion will focus on current and upcoming challenges faced by the International Criminal Court, and the ways in which the Court’s recent work has confronted and responded to pressing global challenges. Experts will discuss issues posed by recent criticism of the Court from those implicated in its examinations and investigations, the increasingly diverse range of examinations and investigations undertaken through the Court and other global criminal justice processes, and opportunities for accountability posed by the Court’s recent cases and decisions, including in Afghanistan and Myanmar. 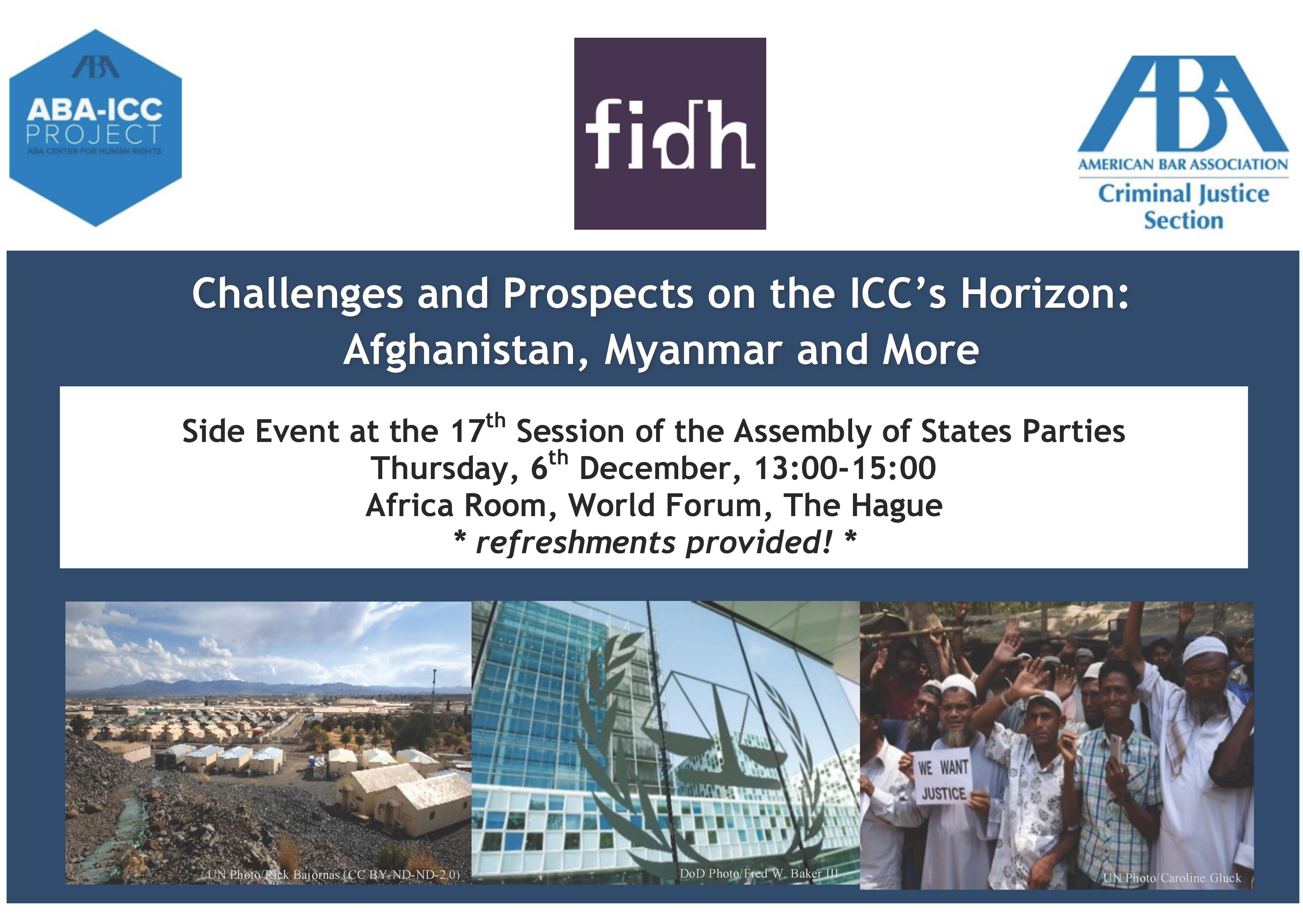