[NEW YORK, NY] – Today, the United Nations Security Council adopted Resolution 2467 on Women, Peace and Security. Although the resolution purports to address the needs of victims of sexual violence in conflict, it contains no direct references to reproductive health—a key component of necessary and comprehensive medical care. This last-minute compromise was made to avoid a certain veto by the United States government.

Over the past several months, the US made clear that it planned to oppose any UN documents that referenced sexual and reproductive health care. The language was stripped from the draft resolution less than a day before it was put before the Council, in a shameful concession to US hegemony.

The German-led resolution underwent an intense drafting process as its champions worked to avoid vetoes from China, Russia, and the United States. Germany has made clear since the beginning of its membership on the Council that conflict-related sexual violence is a major priority. Though it began with an ambitious list of topics, the resolution as adopted by the Council was significantly pared back, particularly concerning women’s bodily autonomy and choice. Almost twenty years after the establishment of the Women, Peace and Security agenda, the Council finds itself unable to deliver on its promises of non-discrimination and gender equality.

While the resolution makes some notable advances in the areas of accountability, reparations, and access to justice, it leaves gaping omissions on several key topics in addition to reproductive health, including the protection of women human rights defenders and members of the LGBTQ community.  Its focus on men and boys is overly simplistic and fails to recognize that conflict-related sexual violence is itself an expression of masculinity and dominance, targeting its victims for highly gendered reasons.

The red line that the Trump administration has placed around the inclusion of language on sexual and reproductive health is an extension of its years of concerted attacks on women's health and bodily autonomy around the world, ranging from the Global Gag Rule to the recent defunding of the Organization of American States.

For the last decade, the Global Justice Center has been at the forefront of the campaign to ensure abortion access for victims of conflict related sexual violence as a matter of their right to non-discriminatory comprehensive healthcare under international law. GJC’s priority areas—demanding justice for sexual and gender based violence and fighting for reproductive rights—are twin pillars critical to ensuring the basic health, safety, and well-being for women and girls around the world. “There can be no justice for conflict-related sexual violence that ignores the basic rights of its victims,” says GJC President Akila Radhakrishnan. “This includes access to the full spectrum of necessary medical care, including abortion services.”

Global Justice Center (GJC) is an international human rights organization, with consultative status to the United Nations, dedicated to advancing gender equality through the rule of law. We combine advocacy with legal analysis, working to ensure equal protection of the law for women and girls. 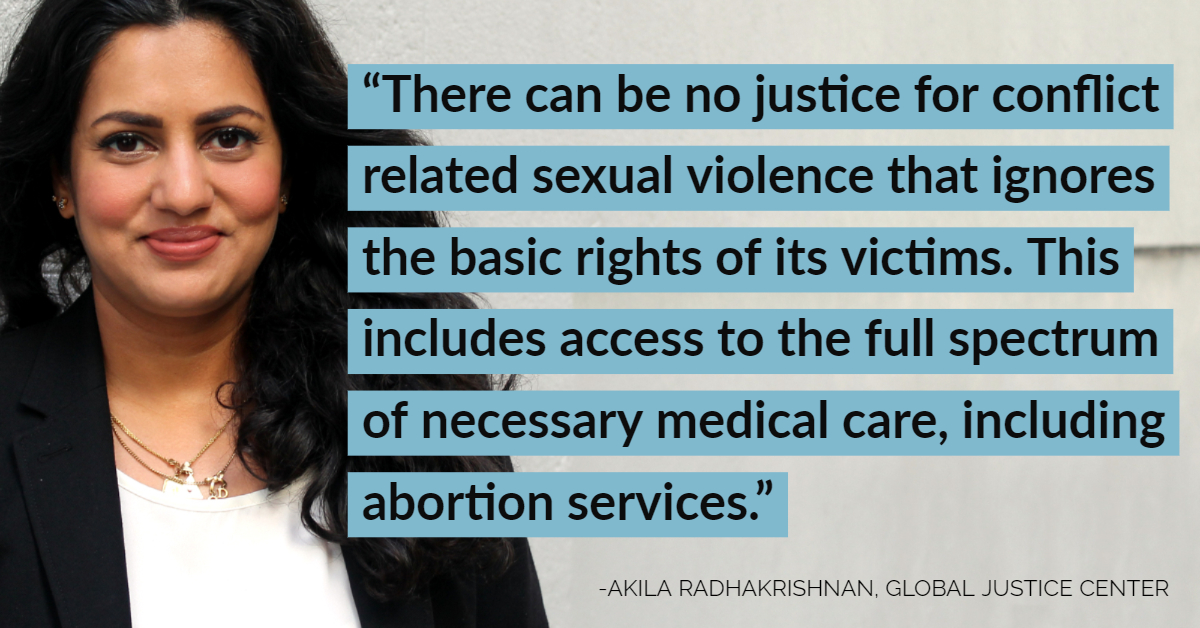